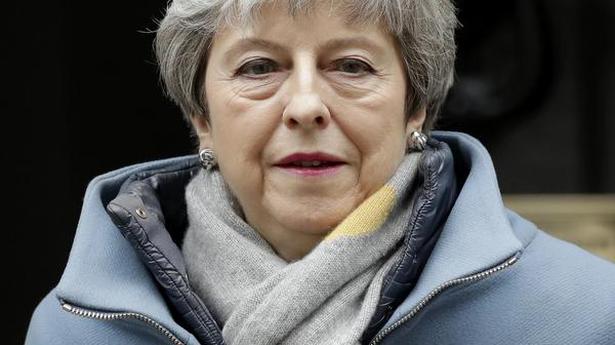 Britain has asked E.U. leaders to delay Brexit until June 30, Prime Minister Theresa May told parliament on March 20, on eve of an E.U. summit in Brussels.

Ms. May said she had written to E.U. President Donald Tusk “informing him that the U.K. seeks an extension to the Article 50 period to June 30”.

“I don’t want a long extension,” she said, warning that a longer delay would mean Britain having to hold European Parliament elections at the end of May. “The idea that three years after voting to leave the EU, the people of this country should be asked to elect a new set of MEPs is, I believe, unacceptable.”

“As Prime Minister, I am not prepared to delay Brexit any further than June 30,” she said.

In the letter to Mr. Tusk released by Downing Street, Ms. May said she intended to bring the Brexit deal she has negotiated with the E.U. back to parliament even though MPs have rejected it twice by overwhelming margins.

“If the motion is passed, I am confident that parliament will proceed to ratify the deal constructively. But this will clearly not be completed before 29 March 2019,” she wrote, adding that the timetable for passing the necessary legislation to allow Brexit was “inevitably uncertain.

“I am therefore writing to inform the European Council that the U.K. is seeking an extension to the Article 50 period… until 30 June 2019.”

Delaying Brexit to June 30 would bring “serious legal and political risks”, the European Commission warned on March 20 in an internal briefing note ahead of the E.U. summit.

Britain has asked to postpone Brexit to that date, but the commission, the E.U.’s executive arm, urged leaders to choose instead between a short delay to May 23 or a longer one to “at least until end 2019”.

The UK Government’s policy remains to leave the European Union in an orderly manner on the basis of the Withdrawal Agreement and Political Declaration agreed in November, complemented by the Joint Instrument and supplement to the Political Declaration President Juncker and I agreed on 11 March.

You will be aware that before the House of Commons rejected the deal for a second time on 12 March, I warned in a speech in Grimsby that the consequences of failing to endorse the deal were unpredictable and potentially deeply unpalatable. The House of Commons did not vote in favour of the deal. The following day it voted against leaving the EU without a negotiated deal. The day after that it supported a Government motion that proposed a short extension to the Article 50 period if the House supported a meaningful vote before this week’s European Council. The motion also made clear that if this had not happened, a longer extension would oblige the UK to call elections to the European Parliament. I do not believe that it would be in either of our interests for the UK to hold European Parliament elections.

In advance of that vote, I would be grateful if the European Council could therefore approve the supplementary documents that President Juncker and I agreed in Strasbourg, putting the Government in a position to bring these agreements to the House and confirming the changes to the Government’s proposition to Parliament. I also intend to bring forward further domestic proposals that confirm my previous commitments to protect our internal market,

given the concerns expressed about the backstop. On this basis, and in the light of the outcome of the European Council, I intend to put forward a motion as soon as possible under section 13 of the Withdrawal Act 2018 and make the argument for the orderly withdrawal and strong future partnership the UK economy, its citizens’ security and the continent’s future, demands.

If the motion is passed, I am confident that Parliament will proceed to ratify the deal constructively. But this will clearly not be completed before 29 March 2019. In our legal system, the Government will need to take a Bill through both Houses of Parliament to enact our commitments under the Withdrawal Agreement into domestic law. While we will consult with the Opposition in the usual way to plan the passage of the Bill as quickly and smoothly as possible, the timetable for this is inevitably uncertain at this stage. I am therefore writing to inform the European Council that the UK is seeking an extension to the Article 50 period under Article 50(3) of the Treaty on European Union, including as applied by Article 106a of the Euratom Treaty, until 30 June 2019.

I would be grateful for the opportunity to set out this position to our colleagues on Thursday.

At an Easter vigil in St. Peter’s Basilica, Pope Francis on Saturday encouraged people to resist cynicism or pursuing the “glitter of wealth,” and to avoid seeking life’s meaning in “things that pass away.” “Do not bury hope!” Pope Francis exclaimed, after noting that when things go badly, “we lose heart and come to believe […]

A elderly Chinese tourist has died of a novel coronavirus infection in France, Health Minister Agnes Buzyn said Saturday. The death adds to a rising toll of over 1,500 — with the overwhelming majority in China — and is the first fatality reported in Europe. France has recorded 11 cases of the coronavirus, out of […]