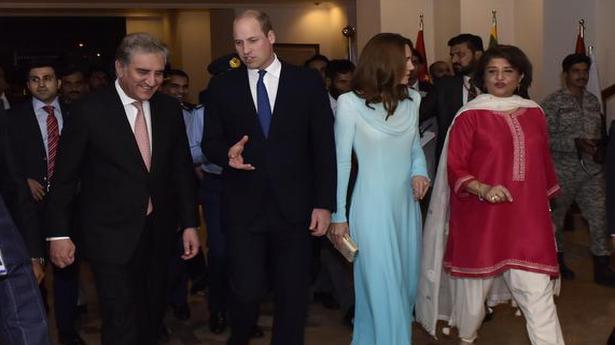 Britains’ Prince William and his wife Kate Middleton on Monday arrived in Pakistan amid tight security for their “most complex” tour to date, the first royal trip to the country in more than a decade.

The royal couple — the Duchess of Cambridge in a long pale blue variation of the shalwar kameez, and the Duke in a dark suit — were accorded a red-carpet reception on their arrival at the Nur Khan Airbase in Rawalpindi, the garrison city adjacent to the capital Islamabad.

They were welcomed by Foreign Minister Shah Mahmood Qureshi and his wife.

Last week, Kensington Palace called the five-day trip “the most complex tour undertaken by The Duke and Duchess to date, given the logistical and security considerations”.

The visit, which will end on October 18, has been organised at the request of the United Kingdom’s (UK) Foreign and Commonwealth Office.

Foreign Minister Qureshi, while speaking to the media at Nur Khan Airbase earlier, recounted the past visits to Pakistan by members of the British royal family.

Mr. Qureshi said that the couple will travel across the country and meet various people.

This is the first royal tour to the country since 2006 when Prince Charles and Camilla, the Prince of Wales and the Duchess of Cornwall, travelled to Pakistan.

Earlier, in a video message shared on Twitter, British High Commissioner Thomas Drew, said that during the visit, the Duke and Duchess of Cambridge will cover the “breadth and depth” of the country.

He said the royal visit, the first in 13 years, would largely focus on showcasing Pakistan as a dynamic, aspirational and forward-looking nation.

The royal couple will visit Islamabad, Lahore and Chitral in the north-west Pakistan before flying back to London.

The High Commissioner said that the couple hopes to meet as many Pakistanis as possible, particularly the youth who are shaping the future of the country.

He said the couple wanted to build a lasting friendship with the people of Pakistan.

Pakistani officials said the itinerary of their five-day stay was being tightly guarded by the military, with local media only being told details at the last minute.

During the tour, the royals are set to visit programmes which empower young people, and organisations that help ensure they have the best possible start in life.

Access to quality education, particularly to girls and young women is seen as one of the UK’s top priorities in Pakistan and the royals will spend time meeting young Pakistanis, and hearing more about their aspirations for the future.

According to local media reports, the royal couple will meet Prime Minister Imran Khan and President Arif Alvi on October 15 and after meeting them, they will go to Lahore on October 16, arriving a day later in Chitral.

President Donald Trump has slapped more sanctions on Russia in connection with the 2018 poisoning of a former Russian spy and his daughter, a move that a Russian lawmaker said Friday will make it less likely for normalized U.S.-Russian relations. Mr. Trump issued an executive order late Thursday that imposes another round of sanctions against […]

Bangladesh said on Tuesday that revoking the special status to Jammu and Kashmir is India’s internal matter and maintaining regional peace and stability should be a priority for all countries. Bangladesh’ reaction on the issue came a day after External Affairs Minister S Jaishankar visited the country and held talks with the top leadership, including […]