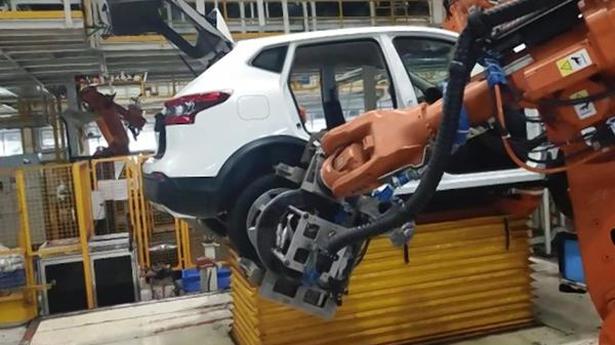 China’s rust belt in the northeast, known for polluting and sluggish heavy industry, is yearning for a revival.

Local officials in Liaoning — a coastal province with a natural outreach to Japan, the Korean Peninsula and Russia — are in a rush to position their province as a key driver of growth in northeast Asia. They anticipate that the province will be on the frontline to engage North Korea, where stirrings of change are already turning heads.

For the local elite, well-attuned to the barrage of instructions and signals emitting from Beijing, the game is to leapfrog the old economy into a new one based on the industry 4.0 model. That means establishing factories run by robots feeding on big data delivered by the state-of-the-art 5G network.

But provincial planners are aware that the new smart economy requires massive funding in digital infrastructure.

In Shenyang, the capital of Liaoning, where elegant Russian and Japanese buildings are a reminder of the eventful history of the early 20th century, the hardware for the new economy is being pillared into place. “In Shenyang, we have already established the Big Data Comprehensive Pilot Area. More than 200 enterprises have marked their presence there. Besides, a Future City, focussing on robotics as well as a software park area, has already taken root,” says Liu Zhuangye, director of the Shenyang people’s government information office. A massive 5G roll-out is also expected later this year.

In order to break from its rust belt shackles, national and local planners have taken the cue from the stunning rise of Guangzhou, Shenzhen and Shanghai — coastal eastern cities that leveraged their harbours and hinterland to marshal the rise of world class manufacturing a few decades ago. “We also have a coastal development plan as part of our strategy to revive the economy,” says Shen Shiyunng, deputy head of the industry and information department of Liaoning province.

For the coastlines of the adjoining Bohai and Yellow Sea to propel northeast China’s revival, the role of the Dalian and Yingkou ports will be crucial. The Yingkou port has been designated to serve Shenyang and its hinterland.

Dalian is a mature deep water port, favoured by foreign powers since the Boxer War that took place at the turn of the 20th century.

In order to leverage its coastal advantage, local authorities are looking for massive foreign investment, especially from South Korea and Japan, to boost export-led growth. However, the trade and techno-war launched against China by the Trump administration of the U.S. could drag down the northeast’s soaring hi-tech dreams.

On the shop floor of Siasun — a Shenyang-based giant that makes all kinds of robots — it would be surprising if the management is unfazed about possible supply restrictions, which could include semiconductor chips, from the U.S.

But at the company headquarters, where shiny blue service robots greet visitors, Wang Yupeng, vice-president of the mobile robot division, says the impact of the U.S. trade restrictions would be minimal as 80% of the inputs for making the bots are homegrown.

Well aware that the western markets may be losing some of their shine, local planners are already focussing on opening up to other economies — South Korea, Japan, Russia, and countries in Southeast Asia, Central Europe and Africa — as the demand centres of the future.

At the headquarters of the privately-owned Yuanda group, which makes a range of products from escalators to curtain walls and new energy products, Freeman Chou, a company executive, says the group had been engaged for developing Terminal 3 at New Delhi’s Indira Gandhi International airport. Pictures of commuters at the Lucknow Metro station, climbing escalators built under the BLT brand of the company, are on display at the main exhibition hall of the enterprise.

“In China, there has been a real estate slowdown, prompting us to export our products to emerging economies and developing countries,” says Wang Feng, the regional head of the company’s elevator division.

Japan’s Emperor Naruhito has greeted the public for the first time since his succession, expressing hope for Japan to keep pursuing peace. Emperor Naruhito ascended the Chrysanthemum Throne on Wednesday, a day after his 85-year-old father, Akihito, abdicated. From a balcony overlooking the palace ground, Emperor Naruhito on Saturday thanked thousands of well-wishers for congratulating […]

Prime Minister Lee Hsien Loong on Tuesday defended Singapore’s proposed law to fight “online falsehoods,” but his Malaysian counterpart, Mahathir Mohamad, warned that anti-fake news laws were a double-edged sword that could be abused by governments to stay in power. The two leaders were speaking after annual talks Tuesday aimed at resolving disputes over maritime […]

Hundreds of Rohingya refugees on a flood-prone island in the Bay of Bengal will not be allowed to leave unless they agree to return home, Bangladesh a Source: thehindu.com Related