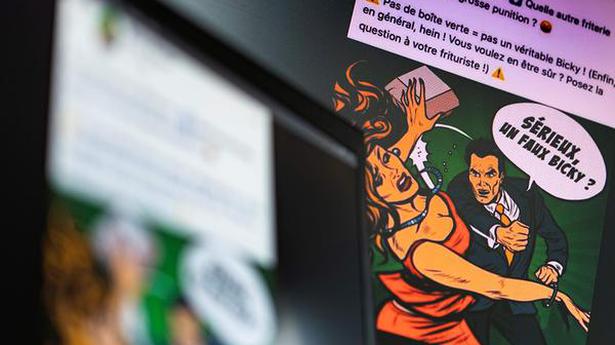 Belgium’s advertising regulator said on Wednesday that it has received hundreds of complaints over a viral hamburger advertisement showing a comic-book version of a man punching a woman for handing him the wrong sandwich.

Its cartoon style borrowed from 1950s and 1960s American pop-art made famous by artist Roy Lichtenstein and by a panel from a 1965 comic showing Batman slapping his sidekick Robin that has been reworked into a long-running Internet meme.

The Bicky Burger advertisement depicts a man in a suit swinging his fist to violently hit a woman carrying a fast-food container as he exclaims: “Seriously, a fake Bicky?”

The head of Belgium’s regulatory Advertising Council, Sandrine Sepul, said the agency had received 300 complaints from the public in 24 hours.

Dutch food company, Izico, which commissioned the advertisement has been asked for its response and may face action.

She said that a Dutch food company, Izico, commissioned the advertisement and her agency had transmitted the complaints to its counterpart in the Netherlands.

Izico was ordered to explain itself, she said, adding that possible punishment could be decided “in a few weeks”.

Belgian media ran indignant reports on the controversy, which led to the ad being pulled from Facebook — but it was relayed thousands of times in individual social media posts.

Le Soir newspaper asked how such an advertising campaign could be created in 2019 when, in Belgium, “every 10 days a man kills his wife or his ex. And every day a number of women are humiliated, raped, beaten.”

Two regional politicians in charge of gender equality for Brussels and for the Wallonia part of Belgium said they had also called on the country’s Advertising Council to act.

One of them, Nawal Ben Hamou, said on her Facebook page she found the ad “sickening and totally irresponsible”.

The other, Christie Morreale, echoed that in a tweet saying that “using violence towards women in an ad is irresponsible”.

Former New York Mayor Michael Bloomberg, who has shown interest in strengthening ties with India, is actively considering entering the 2020 presidential race, according to media reports. Mr. Bloomberg, 77, is mulling over filing the necessary paper work for the Democratic party’s presidential primary in the State of Alabama, reported The New York Times on […]

Rioting breaks out after Guaidó’s call to Venezuela military

Demonstrators clashed with police on the streets of the Venezuelan capital on Tuesday, spurred by Opposition leader Juan Guaidó’s call on the military to rise up against President Nicolás Maduro — who said he had defeated an attempted coup. An apparently carefully planned attempt by Mr. Guaidó to demonstrate growing military support disintegrated into rioting […]

In a major legislative development that could have a profound impact on the gig economy, California’s State Senate passed, 29 to 11, a Bill requiring ride hailing companies like Uber and Lyft to treat their contract workers as employees. The Bill, which is likely to pass the State Assembly and get the Governor’s signature to […]