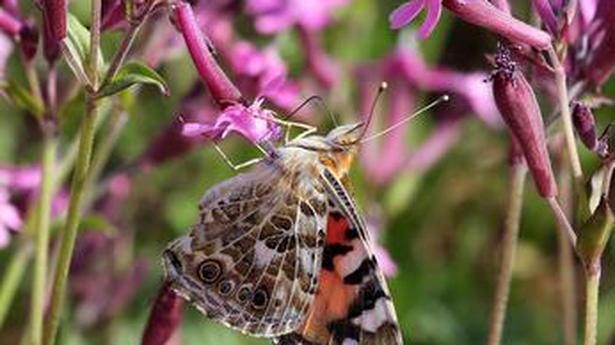 A vast number of migrating butterflies have swarmed across Lebanon this year after heavy winter rain in the Middle East led to an exceptional spring for wild flowers.

“The last time this migration happened in this way was back in 1917,” said Magda Bou Dagher Kharrat, a professor in plant genetics at Lebanon’s St Joseph University.

“They did not only pass through wild areas, forests and nature… so even the people who don’t usually go out to nature witnessed this migration,” said Bou Dagher Kharrat.

“What happened this year should be noted down for history.”

The butterflies’ distinctive black, white and russet wings have earned them the common name of “painted lady” and they could be seen in the northern villages of Mrouj and Zaarour flitting across large meadows of wild flowers.

“It was something really beautiful. People were stopping on the road to watch them… We have never seen anything like it before,” said Rony Kharrat in Zaarour.

But for some villagers the influx brought back reminders of a locust infestation that fell upon Lebanon during its Great Famine of 1915-18, in which thousands died and many others emigrated.

Nassib al-Alam, an elderly farmer who has ploughed his fields for the past 60 years, said at first some people had thought the locusts were back.

“Everywhere is still green, these (butterflies) are just passing by,” he said. “They are beautiful.”

Katherine Johnson, the black woman whose mathematical genius took her from a behind-the-scenes job in a segregated NASA as portrayed in the film “Hidden Figures” to a key role in sending humans to the moon, died on Monday at the age of 101, NASA said. “Our NASA family is sad to learn the news that […]

U.S. President Donald Trump defended on Sunday his latest attack on a prominent African-American lawmaker in comments that drew more accusations of racism. In a series of tweets on Saturday, Mr. Trump took aim at Democratic Representative Elijah Cummings — a high-profile critic of Mr. Trump’s administration whose district covers much of the majority black […]