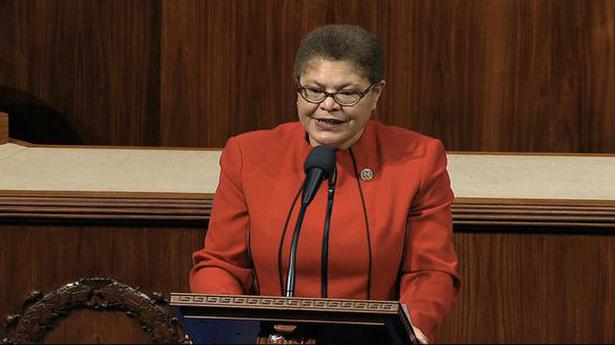 The Citizenship (Amendment) Act (CAA) and the National Register for Citizens (NRC) found mention again in a hearing at the U.S. House of Representatives, which heard witnesses testify on religious persecution across the world. The hearing was organised by the Foreign Affairs Committee’s Africa, Global Health, Global Human Rights Subcommittee and the Oversight and Reform Committee’s Civil Rights and Civil Liberties Subcommittee.

The hearing dealt with experiences in a range of countries and topics including Nigeria, Uganda, Egypt, Pakistan, China, Bangladesh and the United States. India was also specifically mentioned. Four witnesses were heard: Rachel Deitch of the American Humanist Association, Francisco Bencosme of Amnesty International, Rushan Abbas of the Campaign for Uyghurs and Jeremy Barker of the Religious Freedom Institute.

“The country this past year tops the world in the number of internet shutdowns,” Mr. Bencosme, who specialises on advocacy in the Asia Pacific region, told lawmakers about India.

Lawmakers heard from Mr. Bencosme that the CAA was “completely oblivious to the nature and scale of persecution faced by minorities”. On the NRC, he said the process “stands to create the biggest statelessness crisis in the world, causing immense human suffering.”

There was an extensive discussion on the treatment of Uyghurs by the Chinese government including the incarceration of Uyghurs in detention camps, referred to by some at the hearing as ‘concentration camps’.

Lawmakers used the hearing to bring attention to H.R 512, a resolution to repeal blasphemy, heresy and apostasy laws globally.

On Pakistan, Mr. Bencosme said, “In September, Nathu Lal, a school principal … was charged with blasphemy after a mob riled up by a religious order leader leader vandalised a local Hindu temple and attacked properties owned by the Hindu community. The blasphemy laws create an environment in which some people, including complainants and their supporters believe themselves entitled to take the law into their own hands with violent mobs attacking the accused while the police stand aside.”

Representative Karen Bass, who chairs the Subcommittee on Global Human Rights, asked a question on how the U.S.’s own policies, such as recent visa policies which are seen as biased against Muslim countries, as well as the current general environment, impact the U.S.’s ability to address issues in other countries.“You can’t sell abroad, what you’ve lost at home,” Mr. Barker said.

Over the last few months, the government, including via diplomats in Washington DC, has pushed back against criticism from hearings of this nature saying the CAA, Kashmir and the NRC were matters internal to India which was a functioning democracy with its own courts to decide on Constitutional matters.

UNESCO said on Friday it would review the status of the monument as a World Heritage Site following Erdogan’s enouncement Source: thehindu.com Related

Donald Trump’s campaign viewed Roger Stone as an “access point” to WikiLeaks and tried to use him to get advanced word about hacked emails damaging to Hillary Clinton, a former top presidential adviser testified Friday. In reluctant testimony, former campaign CEO Steve Bannon told a federal court that Stone, on trial for lying to Congress […]