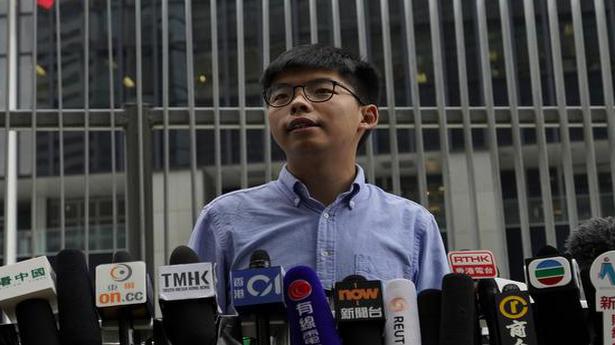 The statement from the Cabinet’s Hong Kong and Macao Affairs Office on Wednesday came as Hong Kong’s leader Carrie Lam warned of the economic damage caused by months of anti-government protests but said the government would not address underlying social and economic concerns until the violence ended.

Mr. Wong, 23, has been repeatedly arrested and jailed in relation to his advocacy of greater democracy, but has not played a major role in the current protests that began in June and have grown more violent.

Despite, that China’s Communist leaders have targeted him in accusing foreign powers of colluding with anti-China separatists to foment unrest.

The Cabinet office statement, citing spokesman Yang Guang, said it “agreed and supported” the decision by the Hong Kong elections office, saying Mr. Wong had been “constantly pleading with foreign powers for intervention” in the territory’s affairs.

Mr. Wong’s advocacy “challenged the bottom line of the principle of ‘one country, two systems,’” the office said, referring to the governing framework under which Hong Kong was handed over from British to Chinese rule in 1997.

Mr. Wong is “one of the chief culprits in the plot to undermine Hong Kong’s prosperity and stability and fundamentally does not meet the requirements of adhering to [Hong Kong’s mini-constitution] and showing loyalty to the Hong Kong Special Administrative Region that are demanded of a candidate for office,” the statement said.

Mr. Wong had disclosed his disqualification as a candidate in the November 24 local district council elections on Tuesday. He called the decision politically driven and said it would backfire. “It will just trigger more and more Hong Kongers to take to the street and also vote in the election.”

In a speech to a trade conference, Ms. Lam said it was a “distressing time for Hong Kong trade and business” and that the violence must end.

“Once calmness returns, we are committed to finding solutions to some of those deep-seated problems revealed by the extensive protests over these past four months,” she said.

Trump suggests Adam Schiff should be arrested for ‘treason’

U.S. President Donald Trump on Monday escalated his attacks against the lawmaker leading the impeachment inquiry against him, suggesting that Representative Adam Schiff be arrested for “treason.” The comment is likely to inflame criticism of Mr. Trump’s handling of the scandal engulfing his presidency, stemming from a telephone call in which Mr. Trump asked Ukraine’s […]

China has formally arrested former Interpol chief Meng Hongwei on suspicion of accepting bribes, prosecutors announced on Wednesday, as he faces possible graft charges. In a remarkable fall from grace, Mr. Meng — who had also served as Vice Minister of Public Security — vanished last September during a visit to China from France, where […]

China and Pakistan on January 14 concluded a nine-day mega naval exercise during which they carried out advance-level joint drills and naval maneuvers in the North Arabian Sea. The sixth ‘Sea Guardians’ exercise took place in the midst of heightened tension between India and Pakistan over the Kashmir issue. Key platforms of both China and […]