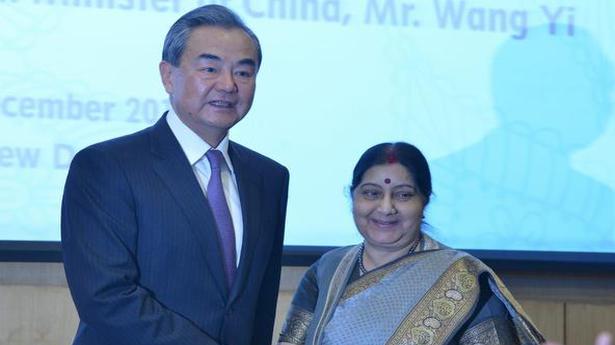 Addressing an annual press conference on the sidelines of the session of the National People’s Congress (NPC), China’s parliament, State Councilor and Foreign Minister Wang Yi, for the first time affirmed that China was engaged in “mediation efforts” to ease tensions between India and Pakistan, following the February 14 terror attack in Pulwama, that killed more than 40 CRPF personnel.

Mr. Wang’s remarks follow the visit to Pakistan by Chinese vice-foreign minister, Kong Xuanyou, amid speculation that the senior Chinese diplomat also intends to visit India. “This is the second time that a Chinese Vice foreign minister is being sent to Pakistan and India-the first time was in 1999, during the Kargil war,” said Liu Zongyi, senior fellow of Shanghai Institutes for International Studies, in a conversation with The Hindu. China, he added, “would like to keep peace and stability in its periphery regions including South Asia”.

In response to a question, Mr. Wang reiterated China’s advocacy for a dialogue between India and Pakistan, which he said should be guided by a long-term vision of the two countries to turnaround their ties.

“China also hopes that Pakistan and India will transform the crisis into an opportunity and meet each other half-way. We advise both parties to quickly turn this page and seek a fundamental improvement in their relations,” Mr. Wang said.

He added: “When confrontation gives way to dialogue and disagreements settled by goodwill, they can create better future through cooperation.”

The Chinese foreign minister reiterated that Beijing’s recent high-profile activism in the India-Pakistan equation was based on the principle of freezing the status quo, fact-finding and dialogue.

“China has stressed from the beginning the need to exercise calm and restraint, prevent an escalation, find out what has happened, and resolve the matter through dialogue. In the meantime, the countries’ sovereignty and territorial integrity should be dutifully respected,” Mr. Wang said.

China’s top diplomat asserted that “China has followed these principles in its mediation efforts, and played a constructive role in defusing tensions.”

He also lauded indications from Pakistan and India “in the last couple of days” to “de-escalate the situation and start talks”.

Analysts however, point out that China appears to have side-stepped New Delhi’s call that it was ready for talks provided Pakistan took visible and verifiable steps to crackdown on Pakistan-based terror groups, such as Jaish-e-Mohammed (JeM) and Lashkar-e-Toiba (LeT), that target India.

China hopes that as part of a millennia old civilization in South Asia, Pakistan and India “will get along with each other and progress together,” Mr. Wang said.

In response to another question on the prospects of New Delhi-Beijing ties in the backdrop of the Wuhan informal summit between Prime Minister Narendra Modi and Chinese President Xi Jinping last April, Mr. Wang said that “2018 was a year of great significance in China-India relations,” and cited the Wuhan summit as a “historic” event. “It not just deepened the friendship and trust between our leaders, but also set the direction of our future relations”.

He added that “collectively,” India and China “must make our due contribution in Asia’s revitalisation and prosperity.”

Mr. Wang hoped that “friendship and cooperation” between India and China, “will surge ahead like the Yangtze and the Ganges, giving strong and sustained impetus to our relationship”.

China’s state-owned Xinhua News Agency has denounced the attack on its office in Hong Kong by pro-democracy protesters as “barbaric.” The city’s journalists also criticized the attack on the media organisation during Saturday’s melee that marked nearly five months of unrest in the Chinese territory. Xinhua in a brief statement strongly condemned the “barbaric acts […]

The United States on Wednesday recorded 1,738 deaths from the coronavirus in the past 24 hours, a lower toll than the day before, according to a running tally by Johns Hopkins University. The new deaths bring the total number of COVID-19 fatalities in the U.S. to 46,583 since the outbreak began there, by far the […]