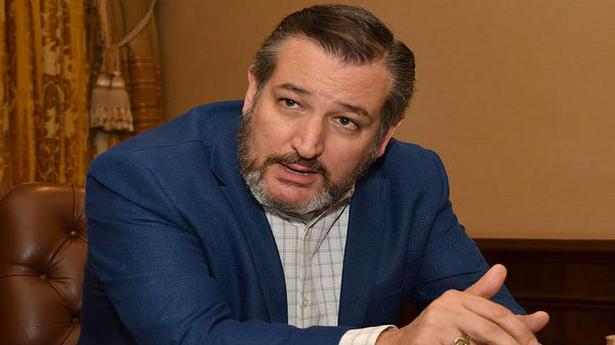 India will risk losing intelligence from by the U.S. if it goes ahead with allows Chinese telecom major Huawei to be part of its 5G infrastructure, a U.S. Republican Senator said during a visit to Delhi that coincided with Chinese President Xi Jinping’s arrival in Chennai.

Texas Senator Ted Cruz, who had welcomed Prime Minister Narendra Modi to Howdy Modi! event in Houston last month and is a member of the Senate Foreign Relations Committee, said he had come to share U.S. concerns about the “Chinese geopolitical threat” as part of an “Indo-Pacific friends and allies” trip. that includes Japan, Taiwan and Hong Kong.

Texas Senator Ted Cruz, a member of the Senate Foreign Relations Committee, who also plays a crucial role in the U.S. reaction to developments in J&K, told The Hindu that while “legal questions” were for India to resolve internally, escalating India-Pakistan tensions were a cause for worry in America.

“The U.S. has made it clear that it would be severely constrained in sharing intelligence with any nation that installs Huawei equipment; that undermines U.S. national security and that of any country that installs it,” asserted Mr. Cruz, who also met Defence Minister Rajnath Singh, Commerce Secretary Anup Wadhawan and business chambers in the capital. While the government has still to announce its decision on whether it will allow the Chinese company in its 5G trials, Huawei has been approved to present a demonstration at the Indian Mobile Congress beginning Monday. Mr. Singh’s office confirmed that Mr. Cruz had discussed China during their meeting but clarified that specific issues like Huawei weren’t part of the discussions.

Full text of the exclusive interview:

You are here at a time when members of the U.S. House and Senate have issued a number of statements about the government’s actions in Jammu and Kashmir, there is a Congressional hearing on human rights next week and the Senate appropriations Bill has called upon India to lift restrictions there. Do you share those concerns?

I think the legal questions of how Kashmir is treated is for India to determine internally, and it is in the U.S.’s interests not to intrude on those questions. But at the same time, we hope not to see Kashmir produce a violent military conflict. Obviously, India and Pakistan have a long and at times, troubled history and the potential of military conflict is always present. My hope is that conflict can be avoided. An escalating conflict with Pakistan makes it harder for India and India’s allies to work together on the pressing priorities we have across Asia and across the world. [My] trip was envisioned as an Indo-Pacific “friends and allies” tour, and I’m very deliberately meeting with some of America’s friends and allies surrounding China and dealing with China from multiple perspectives. I believe China is the most significant geopolitical threat in this next century, for the U.S., India and the world. How we confront that growing Chinese threat is an enormous challenge and the most critical tool for confronting that threat is strong alliances with democracies throughout the region that have shared values, and a critical counterpoint to rising Chinese strength is a strong and rising India. That is in the U.S.’s interests and in India’s interests too.

India doesn’t really do alliances. It hasn’t entered an alliance with any country, including the U.S. And even as you speak, Chinese President Xi is in the country, with the hope that ties will be strengthened on the economic and strategic fronts. According to you, is the Indian government prepared to take on the role you have just spelt out?

I hope so. I am encouraged that PM Modi is leaning in, and wants to be friends with America. India and the U.S. are friends and I believe we should be allies. [China’s] values are dramatically inconsistent with the values in the U.S. and India. As we see millions protesting in Hong Kong, the eyes of the world are focused on Chinese repression. It is incumbent upon democratic nations that respect law and human rights to work together and confront that.

Are you saying that closer India-China ties place a risk on closer ties with the U.S.?

Trade with China is entirely consistent with understanding the threat China poses, and both India and the U.S. are working on trade with China. But that trade shouldn’t be naïve, and we should understand with whom we are dealing. When China implements a state policy to steal our intellectual property, to undermine our safety and security, we should understand the risks entailed. Huawei is a state company controlled by the Communist Party of China and is offering low cost or even free 5G infrastructure. It would be profoundly harmful to India to go down that road.

But would it be harmful to India-U.S. relations?

Yes. It would be harmful to India, and the U.S. is urging our allies and friends not to open the door to total Chinese surveillance. U.S. and India [must] cooperate on intelligence matters, and the U.S. has made it clear that it would be severely constrained in sharing intelligence with any nation that installs Huawei equipment. That undermines the U.S. national security and that of any country that installs it.

When PM Modi visited the U.S., there was the promise of a trade deal that didn’t materialise. Are Indo-U.S. trade ties in trouble?

No. I hope and believe that Indo-U.S. trade will increase substantially in the years ahead. We have seen India’s increased purchase of U.S. security and military systems, and also energy, which has an enormous upside. India has enormous needs for energy, which will continue to grow as its economy does and it is important for India to import from friends like the U.S. than from repressive dictatorships like Iran. I had a good conversation with the Commerce Secretary, I am hopeful we will see a trade deal. No one should be surprised by vigorous negotiations, and I hope we get to [the deal] in a way that helps both nations.

Treason case against Pervez Musharraf to be heard daily from October 24, says Court

A special court in Pakistan on Tuesday said the high treason trial of former Pakistan president and former army chief Pervez Musharraf will start on a daily basis from October 24 as his counsel is down with dengue fever. A three-member tribunal headed by Justice Waqar Ahmad Seth directed all parties to submit their written […]

A Chinese delegation’s visit to Goa has been put on hold by tourism industry stakeholders in view of the novel coronavirus (nCoV) outbreak in the neighbouring country, an official said on Sunday. The delegation, comprising photographers, models, online and offline booking experts, and marketing strategists from China, was supposed to arrive on Sunday, Travel and […]