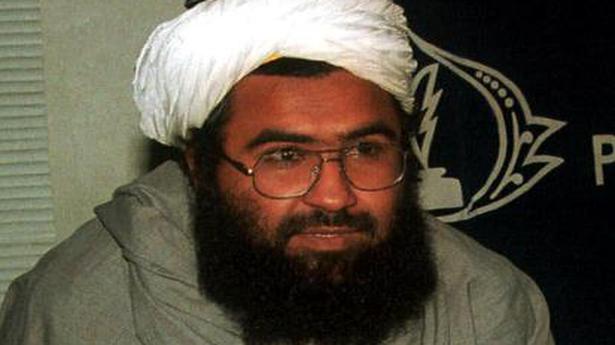 No reason for a hold — which lasts for three months and then can be extended for another six — need be given, and China gave none, diplomatic sources at the U.N told The Hindu.

“The ISIL (Da’esh) and Al-Qaida Sanctions Committee (1267 Sanctions Committee) was not able to come to a decision on the proposal for listing Mohammed Masood Azhar Alvi under the UN Sanctions regime, on account of a member placing the proposal on hold,” a Ministry of External Affairs (MEA) statement said, adding “We are disappointed by this outcome”.

“We will continue to pursue all available avenues to ensure that terrorist leaders involved in heinous attacks on our citizens are brought to justice,” the statement said.

“This has prevented action by the international community to designate the leader of Jaish-e-Mohammed (JeM), a proscribed and active terrorist organization which has claimed responsibility for the terrorist attack in Jammu and Kashmir on 14 February 2019.

The listing request, which was co-sponsored by the United States, United Kingdom and France on February 27, came in response to the suicide attack that killed over 40 CRPF jawans in Pulwama on February 14. Had it gone through, it would have resulted in Azhar being designated as a terrorist and subjected him to sanctions, including an arms and travel ban as well as an asset freeze.

The proposal was open for comments (and objections) until 3 p.m. New York Time (12.30 a.m. Thursday IST) on Wednesday, ten business days after it had been put forth by the P-3 countries. There was speculation — that grew to an expectation as the deadline approached — that Beijing, which had placed “technical holds” three times in the past on similar requests, would once again prevent the current proposal from going through.

Interestingly, Chinese Foreign Ministry spokesperson, Lu Kang said he did not remember that a deadline was associated with the process. “First I want to clarify that I don’t recall saying anything about the deadline about the UNSC committee and other UN subsidiary bodies,” Mr. Lu had said on Wednesday.

However, the listing request, which The Hindu has access to, says, “ The Chair wishes to advise that unless he hears to the contrary by Wednesday 13 March, 2019, at 3:00 p.m., he will take it that the members of the Committee have no objection to the addition of the above-mentioned individual to the ISIL (Da’esh) And Al-Qaida Sanctions List.”

In the end, China chose to place a technical hold on the proposal before the deadline expired.

“We are disappointed by this outcome. This has prevented action by the international community to designate the leader of Jaish-e-Mohammed (JeM), a proscribed and active terrorist organization which has claimed responsibility for the terrorist attack in Jammu and Kashmir on 14 February 2019,” an MEA statement read.

Diplomats from the UK, US and France, the three countries that made the proposal, confirmed that attempts were made until the last day to negotiate with China on the issue. While China had been non-committal about its decision, one diplomat aware of previous negotiations said that this is “the closest” that Beijing had come to accepting the listing for Azhar, an American diplomat told The Hindu.

“JeM is a United Nations-designated terrorist group. Azhar is the founder and the leader of JEM, and he meets the criteria for designation by the United Nations. JEM has been responsible for numerous terrorist attacks and is a threat to regional stability and peace,” State Department spokesperson Robert Palladino had said at a briefing in response to a question from The Hindu, on Tuesday.

“I would say that the United States and China share a mutual interest in achieving regional stability and peace, and that a failure to designate Azhar would run counter to this goal,” Mr Palladino had said.

Thanking the countries that sponsored the designation request and the “unprecedented number” of UNSC members as well as non-members who joined the process, the government said it would, “continue to pursue all available avenues to ensure that terrorist leaders who are involved in heinous attacks on our citizens are brought to justice.”

“The number of co-sponsors reflects growing global concern on the activities of Jaish-e-Mohammad (JeM) and Masood Azhar,” diplomatic sources at the UN told The Hindu. [The Hindu was not able to independently verify the full list of co-sponsors].

(With inputs from Atul Aneja in Beijing)

A 16-year-old boy who killed two students and wounded three others at his Southern California high school before turning a gun on himself died on Friday without investigators discovering the motive for the attack, authorities said. Nathaniel Tennosuke Berhow, died from a head wound. His mother was present when he died, according to a Los […]

Coronavirus | Not feasible to evacuate all Indian citizens from abroad, says government