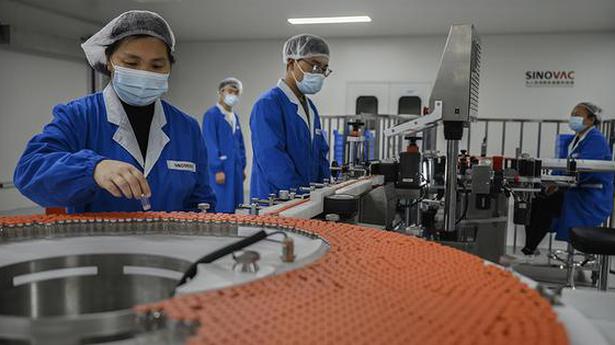 Provincial governments across China are placing orders for experimental, domestically made coronavirus vaccines, though health officials have yet to say how well they work or how they may reach the country’s 1.4 billion people.

Developers are speeding up final testing, the Chinese Foreign Minister said during a UN meeting last week, as Britain approved emergency use of Pfizer Inc.’s vaccine candidate and providers scrambled to set up distribution.

Even without final approval, more than 1 million health care workers and others in China who are deemed at high risk of infection have received experimental vaccines. There has been no word on possible side effects.

China’s fledgling pharmaceutical industry has at least five vaccines from four producers being tested in more than a dozen countries, including Russia, Egypt and Mexico. Health experts say even if they are successful, the certification process for the U.S., Europe, Japan and other developed countries might be too complex for them to be used there. However, China said it will ensure the products are affordable for developing countries.

China National Pharmaceutical Group, known as Sinopharm, said in November it applied for final market approval for use of its vaccine in China. Others have been approved for emergency use on people deemed at high risk of infection.

“We must be prepared for large-scale production,” said Vice Premier Sun Chunlan, who has overseen much of the country’s response, during a visit Wednesday to developers, according to the official Xinhua News Agency.

The government has yet to say how many people it plans to vaccinate.

Hong Kong police fired volleys of tear gas to break up anti-government protests in a gritty industrial suburb on Saturday after activists threw petrol bombs and bricks, as China freed a British consulate worker whose detention had fuelled tensions. Four MTR subway stations were closed around Kwun Tong, a densely populated area of the Chinese-ruled […]

Violence linked to Islamic extremists, and the local defense groups and military fighting them, is surging across Burkina Faso. Some 2,000 people died last year, and large swaths of land are increasingly being cut off due to insecurity. Source: thehindu.com Related

He repeats remarks he made in 2016 as polls show him lagging behind Biden. Source: thehindu.com Related