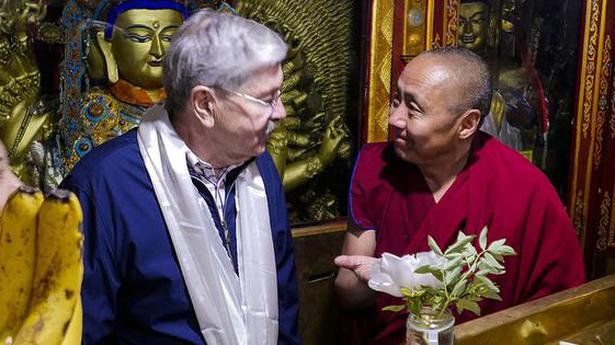 China on Tuesday rejected U.S. Ambassador Terry Branstad’s call to Beijing to engage in “substantive dialogue” with the Dalai Lama, saying that it was firmly opposed to “foreign interference” in Tibet and its internal affairs.

Mr. Branstad visited Tibet from May 19 to 25, the first such visit by a U.S. ambassador to China to the remote Himalayan region since 2015, where access is restricted for diplomats and journalists.

Mr. Branstad, during his visit to Tibet last week, had asked the Chinese government to “engage in substantive dialogue with the Dalai Lama or his representatives without preconditions, to seek a settlement that resolves differences,” according to a U.S. Embassy spokeswoman.

“He also expressed concerns regarding the Chinese government’s interference in Tibetan Buddhists’ freedom to organise and practice their religion,” she said.

Asked about the U.S. envoy’s call for dialogue with the Dalai Lama, Chinese Foreign Ministry spokesman Lu Kang told media that Chinese officials had briefed the Ambassador about China’s religious and ethnic policies and also about socio-economic development in Tibet.

“The Chinese government’s policy on dialogue and contact with the Dalai Lama and foreigners access to Tibet [were made clear to the Ambassador]. Finally, it was also stressed that China firmly opposes any foreign interference in Tibet affairs in China’s domestic affairs,” said Mr. Kang.

“The ambassador thanked China for the hospitality given to him and spoke positively about socio-economic development in Tibet and said that the visit helped him have a better understanding of the situation in Tibet,” Lu said.

Beijing’s permission to Branstad came after the U.S. early this year passed the Reciprocal Access to Tibet Act of 2018, warning equal and reciprocal measures if Beijing denied access to American citizens, government officials and journalists to Tibet.

The new U.S. law would impose a visa ban on Chinese officials who deny American citizens, government officials and journalists access to Tibet.

Before the US’s envoy’s visit, Lu hoped that he would make an objective and unbiased judgement on the situation in Tibet.

China, which accuses the Dalai Lama as a “splittist” working for Tibetan independence, has held talks with the Dalai Lama’s representatives to find an amicable solution to the Tibetan issue in the past. The last such dialogue took place in 2010.

The 14th Dalai Lama had fled to India in early 1959 to escape from the Chinese occupation and lives in exile in the hill town of Dharamshala.

Over 120 Tibetans committed self-immolations in recent years calling for the return of the Dalai Lama from his exile in India.