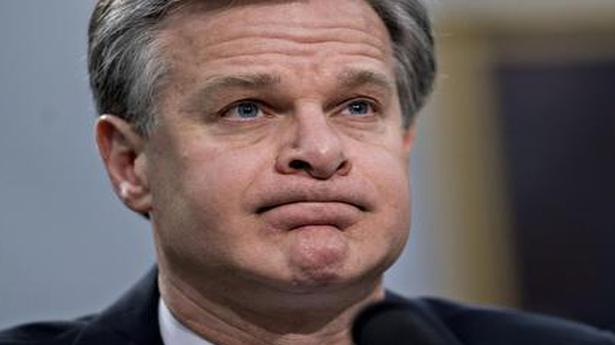 FBI Director Christopher Wray described China the most significant “intelligence collection” theat. His comments were made at a discussion at the Washington DC offices of the Council on Foreign Relations, a think-tank.

“China has pioneered a societal approach to stealing innovation in any way it can from a wide array of businesses, universities and organizations. They’re doing it through Chinese intelligence services, their state-owned enterprises, through ostensibly “private” companies, through graduate students, through researchers, through a variety of actors all working on behalf of China,” Mr. Wray said.

On Thursday the U.S Trade Representative said it was keeping China on a ‘priority watch list’ of countries that are of significant concern to the U.S. in terms of their inadequate protection of IP. China’s IP laws are a contentious topic and have featured in the trade talks between the two countries. The U.S. is also aggressively working with allies in trying to keep China out of dominating the building of global 5G network infrastructure such as by taking action against Chinese tech giant Huawei.

Mr Wray described Russia as a “very significant” threat in response to a question on Special Counsel Robert Mueller’s characterization of Russian interference in the 2016 presidential election as “sweeping and systematic”.

Mr Wray is a Trump appointee and his comments are in contrast with those from several senior administration officials, who have tended to play down the role of Russian influence on the campaign.

Mr Wray said malign foreign influence has continued “pretty much unabated” through the use of fake news, propaganda, false personas to sow divisiveness and undermine Americans’ faith in democracy. This was in response to a question on the scale and nature of the foreign influence threat between the 2016 presidential election and 2018 midterm elections.

However, Mr Wray said there was no material impact or interference with election or campaign infrastructure in 2018. U.S. intelligence was looking at 2018 as a “dress rehearsal” for 2020 [ U.S. presidential elections] he said.

On the Sri Lanka bombings of Easter Sunday, Mr Wray said that the FBI had sent personnel over to assist in the investigation to work with its partners in Sri Lanka.

“You always hear this phrase about ‘connecting the dots’ in the terrorist arena, but a lot of the terrorist plots of today are more compact, involving fewer people, less complicated attacks, shorter period of time, which means fewer dots to connect in the first place,” he said, adding that information encryption has made the dots even fewer and the time in which law enforcement can act has been compressed.

Safe on streets, unsafe inside the house

On a dark night earlier this month, Taynara Santos, 30, got into an argument with her ex-husband at her home in Capao Redondo, São Paulo. As the night dragged on, the man became violent, refusing to accept the end of their relationship. Around midnight, as his final argument, he pulled out a revolver, aimed it […]

For Israeli PM Benjamin Netanyahu, party’s support is key to his political survival

Prime Minister Benjamin Netanyahu looked to project business as usual on Sunday as he returned to work following his indictment on graft charges, but a wall of silence from his usually loyal Cabinet Ministers indicated tough times ahead for the embattled Israeli leader. Mr. Netanyahu is determined to fight the charges from the Prime Minister’s […]

A Malian Police Commissioner was killed on Thursday by a mob that accused him of links with bandits, the Security Ministry said. Protesters besieged a police station in the central town of Niono, accusing the Police Commissioner, Issiaka Tounkara, of abuses. “A horde of people armed with projectiles of all kinds ransacked the station and […]