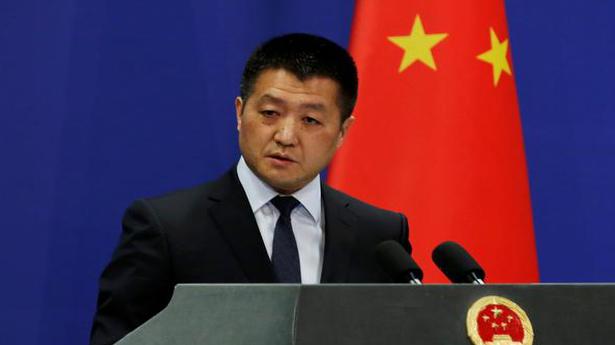 China on Monday reiterated that it would continue to play a “constructive role in its own way” to ease tensions between India and Pakistan.

“I have also said here that in order to alleviate the tension between India and Pakistan in the near future, China has maintained close communication with both India and Pakistan and is doing the work of persuading and promoting talks,” Mr. Lu said without confirming whether a Chinese special envoy was embarking on a visit to India and Pakistan.

He added: “As long as it is conducive to the relaxation of the situation on both sides and is conducive to peace and stability in the region, China will continue to play a constructive role in its own way.”

Referring to Mr. Lavrov’s suggestion on the SCO’s possible involvement, Mr. Lu said that “(Russian) foreign minister Lavrov said that he could consider using the relevant mechanism of the SCO to do some work. China’s principled position is that we encourage the relevant parties in the international community to make all constructive efforts that are conducive to promoting the relaxation of the regional situation and maintaining peace and stability in the region.”

Russia’s Tass news agency is quoting a foreign ministry statement regarding a conversation between Mr. Lavrov and his Pakistani counterpart on defusing Indo-Pak tensions.

“Russia stressed the need for all countries to observe a provision on universal counter-terrorism conventions and cooperate for their implementation,” the Russia foreign ministry said, noting the possibility of using for these goals the mechanism of the Regional Anti-Terrorist Structure of the Shanghai Cooperation Organization (SCO).

In response to another question on the Russian proposal, Mr. Lu said, “…I have already said that we welcome all positive measures that will help ease the current regional situation and promote regional peace and stability.”

“In fact, the Chinese side has maintained close communication with India and Pakistan and has been doing the work of persuading and promoting talks. We are willing to continue to play such a constructive role.”

U.S. Defense Secretary Mark Esper said on Thursday there were indications Iran or forces it backs may be planning additional attacks, warning that the “game has changed” and it was possible the United States might have to take preemptive action to protect American lives. “There are some indications out there that they may be planning […]

U.S. President Donald Trump on Saturday said he was looking forward to being with his “great friends” in India next week as he retweeted a short video in which his face was superimposed on the hit movie-character Bahubali, showing the president as a great saviour bringing peace to his kingdom. President Trump will pay a […]