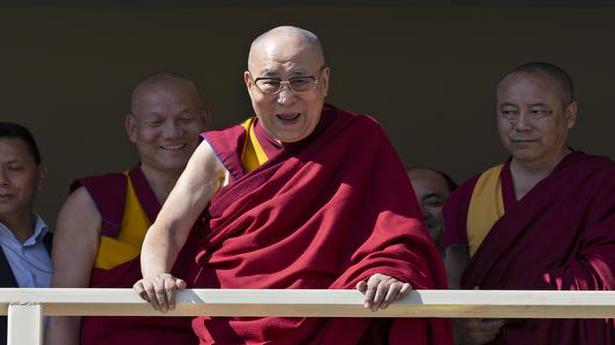 China on Tuesday said its approval is a must for choosing the successor to Tibetan spiritual leader the Dalai Lama, rejecting the United States’ assertion that the next-in-line to Tibet’s exiled leader will be selected by the Tibetan people themselves and not by Beijing.

U.S. Ambassador at Large for International Religious Freedom Sam Brownback, who met the Dalai Lama in Dharmshala on Monday, hit out at what he called China’s persecution of the Tibetan people’s faith and said they have the right to choose their own religious leaders.

The role of picking a successor to the Dalai Lama belongs to the Tibetan Buddhist system, the Dalai Lama, and other Tibetan leaders. It does not belong to anybody else, not any government or any entity, Mr. Brownback was quoted as saying by Radio Free Asia (RFA).

Mr. Brownback made the remark while speaking at a conference hosted by the Tibetan Institute for Performing Arts in Dharamshala — the seat of the Tibetan government-in-exile.

Concerns over the health of 84-year-old Dalai Lama, who fled into exile in India following a failed 1959 Tibetan revolt against Chinese rule, have renewed uncertainties over his possible successor after his demise.

China claims control over the selection, asserting that the successor to the Dalai Lama has to be endorsed by it.

“The 14th Dalai Lama has long been carrying out anti-China activities overseas under the pretext of religion,” Mr. Geng said.

“China firmly opposes any contact with the Dalai Lama by any foreign official. The words of a certain U.S. official violates U.S. commitment to recognise Tibet as part of China, and not to support Tibetan independence. China firmly opposes such words and deeds,” he said.

“The Chinese government implements the policy of freedom of religious belief. The reincarnations system is respected and protected by certain legal instruments such as the Regulations on Religious Affairs and the measures on the Management of the Reincarnation of Living Buddhas,” he said.

“The institution of reincarnation of the Dalai Lama has been in existence for several hundred years. The 14th [present] Dalai Lama himself was found and recognised following religious rituals and historic conventions, and his succession was approved by the then central government. Therefore, the reincarnation must comply with Chinese laws and regulations, follow religious rituals and historic conventions,” he added.

“We strongly urge the U.S. to stop contact with the Dalai Lama group, stop uttering irresponsible remarks, stop using Tibet-related affairs to interfere in China’s internal affairs, and do more to contribute to mutual trust and cooperation between China and the U.S.,” Mr. Geng said.

Significantly, Mr. Brownback also called on the Chinese government to release the Dalai Lama-appointed Panchen Lama Gedhun Choekyi Nyima, who has been replaced by Beijing in 1995. He has since disappeared and his whereabouts are unknown.

“We call on the (People’s Republic of China) government to release immediately the Tibetan-recognised Panchen Lama Gedhun Choekyi Nyima or share the truth about his fate with the world, RFA quoted Mr. Brownback as saying.

Panchen Lama is regarded in Tibetan Buddhist hierarchy as second most important after the Dalai Lama. After replacing Nyima, China appointed a Bainqen Erdini who continued to remain Panchen Lama since.

While the whereabouts of Nyima are not known, a Tibetan official said in 2015 that he is receiving education and living normally.

Mr. Brownback said we stand with the people of Tibet as they seek to preserve their time-honoured traditions including the right to venerate religious leaders of their choosing.

In recent months, the Trump administration has stepped up pressure on China to relax controls over Tibet. In May this year, China rejected U.S. envoy to Beijing, Terry Branstad’s call to hold unconditional dialogue with the Dalai Lama.

Mr. Branstad, who was given rare permission to visit Tibet after U.S. raised objections to the restrictions to its diplomats and journalists to Tibet, during his visit asked the Chinese government to engage in substantive dialogue with the Dalai Lama or his representatives, without preconditions, to seek a settlement that resolves differences.

Mr. Branstad was the first U.S. envoy to have been permitted to visit Tibet since 2015.

Beijing’s permission to Mr. Branstad came after early this year the U.S. passed the Reciprocal Access to Tibet Act of 2018, warning equal and reciprocal measures if Beijing denied access to American citizens, government officials and journalists to Tibet.

The new U.S. law would impose a visa ban on Chinese officials who deny American citizens, government officials and journalists access to Tibet.

Thailand has reopened the cave where 12 young footballers and their coach were trapped last year in a saga that captivated the world. The Tham Luang cave has been closed to visitors since the Wild Boars football team were rescued alive after nearly three weeks inside the grotto’s waterlogged corridors. Also read: Thai cave rescue […]

The Islamic State in Jammu and Kashmir (ISJK) has a Pakistani connection, the National Investigation Agency (NIA) has said in its chargesheet filed recently in a Jammu court. The agency, however, does not substantiate how it reached the conclusion about the Pakistani identity of the handler of the four ISJK “terrorists” arrested last year. Each State […]

Australian senator Fraser Anning has hit the headlines yet again after his controversial comments on the real reason behind the Christchurch mosque shooting. A young man smashed an egg on Anning’s head in Melbourne while the senator was speaking with the media. The incident was caught on video cameras and the video has since gone […]