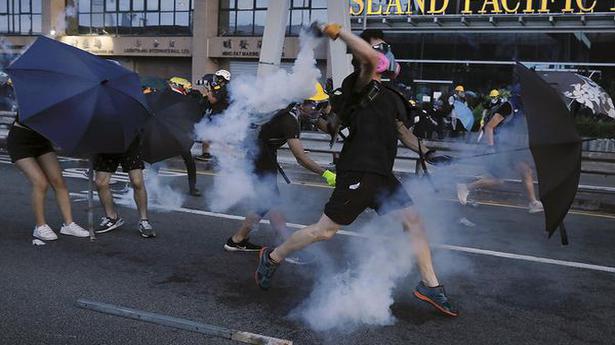 China on Monday made it plain that the rules governing Hong Kong were cast in stone and warned protesters, who have been pouring into the streets, that it fully backed the local authorities in confronting violent protests and defending the “rule of law”.

In a media conference in Beijing, following weeks of protests, marked with sporadic violence, the spokesperson for Hong Kong and Macao Affairs Office of China’s State Council, Yang Guang, asserted that there could not be any compromise with the enforcement of rule of law. He stressed that governance by law was the foundation of Hong Kong’s sound business environment, and an important cornerstone for the region to maintain its prosperity and stability.

Crowds have been pouring into the streets, especially during weekends, for eight weeks to slam an extradition bill — now suspended — that would have cleared transfer of criminal suspects in Hong Kong to courts in China.

Spelling out China’s zero-tolerance towards unlawful protests, Mr. Yang said: “We cannot just sit by and watch a small group of people recklessly trample on the rule of law.” He added that if the backbone of rule of law was shaken, the prosperity and stability of Hong Kong would be in jeopardy.

The official also made it explicit that there were no differences between central and local atrocities in Hong Kong which protesters and their backers could exploit. “The central government firmly supports Chief Executive Carrie Lam leading the Hong Kong Special Administrative Region (SAR) government in the law-based governance, supports the Hong Kong police in their strict law enforcement, supports relevant departments of the SAR government and judicial organs in punishing the violent criminals in accordance with the law, and supports the people who love both our country and Hong Kong in their action to defend the rule of law in the region,” he observed.

On Monday, Beijing also hammered home the red-lines, defined by the one country-two system formula, which allows Hong Kong substantial autonomy, in defining and executing judicial, administrative and financial rules, while remaining a part of China.

Mr. Yang was unambiguous in listing three bottom lines — “no harm to national security, no challenge to the central government’s authority and the Basic Law, and no using Hong Kong as a base to undermine China”, while spelling out Beijing’s most comprehensive response to the protests so far.

Asked whether the Hong Kong garrison of the People’s Liberation Army (PLA) would be deployed to quell the protests, Mr. Yang said: “The Basic Law has clear statements on that question, and I have nothing to add.”

Another Chinese official, Xu Luying who addressed the media conference signaled that mainland China and Hong Kong’s future, based on economic integration, was inextricably tied.

The IMF has said that Sri Lanka’s economy is gradually recovering from Easter Sunday terrorist attacks in 2019 with GDP growth projected at 3.7% in 2020. Issuing an end-of-mission statement, an IMF staff mission to Sri Lanka estimated the Real GDP growth at 2.6% in 2019 but expected the GDP to bounce back in 2020 […]