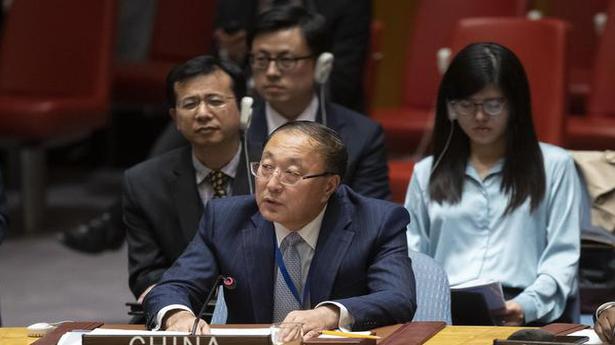 The United States and 22 other countries at the United Nations pushed China on Tuesday to stop detaining ethnic Uighurs and other Muslims, prompting China’s U.N. envoy to warn it was not “helpful” for trade talks between Beijing and Washington.

China has been widely condemned for setting up complexes in remote Xinjiang that it describes as “vocational training centers” to stamp out extremism and give people new skills.

The United Nations says at least 1 million ethnic Uighurs and other Muslims have been detained.

“It’s hard to imagine that on the one hand you are trying to seek to have a trade deal, on the other hand you are making use of any issues, especially human rights issues, to blame the others,” China’s U.N. Ambassador Zhang Jun told reporters.

He said there was “progress” in the trade talks. But he said of the U.S. criticism of China at the United Nations: “I do not think its helpful for having a good solution to the issue of trade talks.”

U.S. and Chinese negotiators are working to complete the text of an interim trade agreement for U.S. President Donald Trump and Chinese President Xi Jinping to sign at an Asia-Pacific Economic Cooperation summit in Chile on November 16-17.

A U.S. administration official said on Tuesday it might not be completed in time for signing in Chile, but that does not mean the accord is falling apart.

When asked if the statement criticising China could affect trade talks, U.S. Ambassador to the U.N. Kelly Craft said: “I would be standing here regardless if it was China or wherever it is, wherever there are human rights abuses we would be here in defense of those that are suffering.”

“We call on the Chinese government to uphold its national laws and international obligations and commitments to respect human rights, including freedom of religion or belief, in Xinjiang and across China,” Mr. Pierce said.

The group of states pushed China to urgently implement recommendations by independent U.N. experts on the situation in Xinjiang, “including by refraining from the arbitrary detention of Uighurs and members of other Muslim communities.”

They also called on countries not to send refugees or asylum seekers back if they could face persecution, Pierce said.

Mr. Zhang described the accusations against Beijing as baseless and a “gross interference in China’s internal affairs and deliberate provocation.”

He praised Beijing’s respect and protection of rights while dealing with counter-terrorism and de-radicalisation in Xinjiang and its commitment to openness and transparency by inviting diplomats, journalists and officials to the region.

“Now safety and security have returned to Xinjiang and fundamental human rights of people of all ethnic groups there are safeguarded,” Mr. Rybakov said. “We commend China’s remarkable achievements in the field of human rights.”

The statements follow a similar move at the U.N. Human Rights Council in July when 22 states — including the United States and Britain — wrote a letter calling on China to halt its mass detentions. In response, Saudi Arabia, Russia and more than 30 other countries wrote a rival letter that commended China’s rights record.

The United States led more than 30 countries at an event on the sidelines of the annual U.N. gathering of world leaders last month in condemning what it called China’s “horrific campaign of repression” against Muslims in Xinjiang. China denounced the event.

India has begun the process to evacuate nationals from the epicentre of the coronavirus outbreak, Hubei province of China. External Affairs Minister S. Jaishankar on Tuesday said the government was planning to send a plane to Wuhan and a special Air India flight had got the go-ahead from aviation regulator, Directorate General of Civil Aviation […]