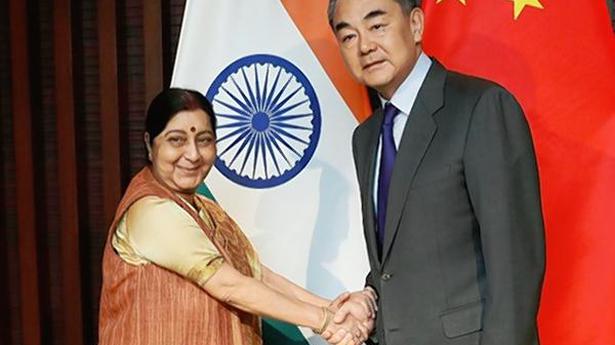 It was 6 a.m. in India and 8.30 a.m. in China when Chinese State Councillor and Foreign Minister Wang Yi briskly entered the room designated for talks with External Affairs Minister Sushma Swaraj.

The two were meeting in the picturesque water town of Wuzhen, about a two-hour drive from the better known city of Hangzhou, China’s technology hub and hometown of Jack Ma, the head of e-commerce giant Alibaba.

At the heart of Wuzhen are two adjacent scenic areas, whose well-worn wooden buildings, some dating back to the Tang dynasty, are connected by foot bridges and canals. In the early morning mist that surrounds the area, Chinese boats of a bygone era ferry early risers along the placid waters.

At the talks, on February 27, when news about Pakistan’s retaliatory air strike, following an Indian attack on Balakot, had not filtered through, the chemistry between Mr. Wang and Ms. Swaraj could not have been better. Both shook hands warmly, posed for pictures and smiled, before settling in for talks along a U-shaped table.

Despite the overhang of the Indian air strikes, there was ample comfort level between the two veterans. “You cheated me,” Ms. Swaraj told Mr. Wang, lightheartedly, who curiously smiled. “You told me we would be meeting in Shanghai, but we are meeting in Wuzhen.” Ms. Swaraj then pointedly told her opposite number that the choice of Wuzhen as the venue of talks between the Foreign Ministers of Russia, India and China (RIC) was even better than Shanghai. “I have asked our Ambassador (Vikram Misri) that I would like to see the city for two hours. After that, I will go to Delhi,” she said.

By the afternoon, after the two Foreign Ministers and Sergei Lavrov, their Russian counterpart, held a plenary meeting and had chatted informally, China’s balancing act — of being tough against sanctuaries of terrorism across the Line of Control (LoC), so long as Pakistan was not publicly named and shamed, became evident.

At a post-lunch press conference, Mr. Wang tacitly backed Indian air strikes, when he said it was “especially important” to “eradicate the breeding grounds of terrorism and extremism”. Quickly grasping the importance of the assertion, Ms. Swaraj, on two occasions, latched on to Mr. Wang’s observation.

In response to a question on whether there was divergence on the February 14 Pulwama attack between India and China, Ms. Swaraj said: “What he [Mr. Wang] said during his concluding statement [at the plenary], he reiterated here, and he said we would cooperate on eradicating the breeding grounds of terrorism.” But the Chinese Foreign Minister was also emphatic against accusing Pakistan as a state sponsor of terrorism.

By nightfall, there was another twist to the Chinese position, once the news of the arrest by Pakistan of Wing Commander Abhinandan Varthaman, after his plane crashed following a dogfight, had percolated. Pakistan’s Prime Minister Imran Khan had already been quoted as saying that preparations for a massive Indian missile strike on Pakistan were in the works. A late night call to Mr. Wang from Pakistani Foreign Minister Shah Mehmood Qureshi, which further amplified the alarm, triggered a statement by the Chinese Foreign Ministry. The Chinese side exhorted both sides to freeze the status quo, along with a promise of Beijing’s diplomatic activism to ease tensions between India and Pakistan. On March 6, Chinese Vice-Foreign Minister Kong Xuanyou was already in Islamabad to establish an “enabling atmosphere” and “promote dialogue” between India and Pakistan.

There are real reasons for China to perform a fine balancing act. Pakistan provides China an access to the Indian Ocean — somewhat alleviating the pressure Beijing confronts in the U.S.-dominated West Pacific. But India too is important as the ongoing low intensity Cold War between Beijing and Washington is likely to persuade the U.S. to woo New Delhi as a quasi- ally, along with Japan and Australia, for the containment of China.

Also, a war between its two members, India and Pakistan, would wreck the Shanghai Cooperation Organisation, of which China and Russia are the chief architects.

Boeing Co on Wednesday took its most aggressive moves yet to defend its core 737 airliner franchise, saying it had developed software fixes to prevent failures of an automated flight control system that is being scrutinised after two deadly crashes in the past five months. Boeing, in the midst of one its worst crises in […]

The story so far British Prime Minister Theresa May has just had one of the most tumultuous weeks in her political career. With just two weeks to go before Britain’s scheduled departure from the European Union, MPs voted against her Brexit agreement, for a second time, on Tuesday. The next day, they voted to reject […]