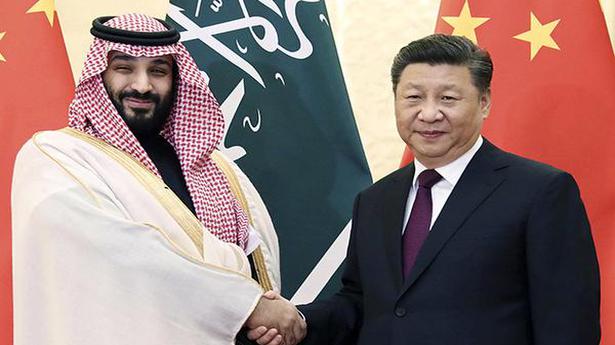 China unrolled the red carpet for the visiting Crown Prince of Saudi Arabia, Mohammed bin Salman, who was in Beijing in February on a high-profile visit.

The harsh winter chill in the Chinese capital had not abated, but there were visible signs that the spring was breaking out in ties between Beijing and Riyadh.

There was plenty to breed hope among the mandarins in Beijing that Saudi Arabia — a swing state in the Arab world — could be persuaded to widen its distance from the United States, and become part of an emerging multipolar world.

For starters, Saudi Arabia, under the direction of the Crown Prince — widely seen as the de facto ruler from the House of Saud — had already embarked on an “Act East” policy. It meant that the oil-rich nation was doctrinally on course to balancing its ties between the West and the East.

The Chinese, in their extraordinary effort to woo the Crown Prince, were aware that Riyadh pulled considerable weight in the Arab world and beyond. This was not only because of Riyadh’s economic heft. It was also because of its unique soft power.

Saudi Arabia is the custodian of the two holy mosques of Islam. Millions of Muslims land at Jeddah Airport, en route for the annual Haj pilgrimage, woven through great Islamic cities of Mecca, and the nearby Medina.

Saudi Arabia’s word thus echoed, with some natural deference, among millions residing in all the five continents, including the parchlands of Xinjiang in China.

Xinjiang has been critical to China’s Belt and Road Initiative (BRI), a giant connectivity project, on account of its prized strategic location. It is also the gateway to Central Asia — a critical piece of geography that opens out towards Russia and Europe, with spurs leading into Iran to the south and the vast grasslands of Mongolia to the north.

For decades, Xinjiang has been restive, mainly due to the reluctance of the ethnic Uighurs — of Turkic origin — to enmesh with China’s dominant Han culture. China has used all the proven tools — massive economic development, modern secular education, psychological dissuasion away from radicalism and use of significant force.

Yet, the multi-pronged approach to align Xinjiang with the national mainstream has only yielded mixed results.

So, when the Crown Prince arrived from Pakistan and India — visits meant to demonstrate his “Look East” impulses — the Chinese were keen to have him on-board their Xinjiang narrative.

If MBS, as the Crown Prince is widely known, could agree that restiveness in Xinjiang was not a human rights problem, but an expression of violent ethnic separatism, that would energise China’s global public relations campaign significantly. It would also help dent the scathing recent diplomatic assault on China by Turkey on the alleged repression of its Turkic brethren in Xinjiang.

Prince Mohammed responded well to China’s ardent urgings. Chinese media cited his unqualified support for the “One-China” policy. In non-diplomatic language, it meant a rejection of all demands for a separate state in Xinjiang, Tibet and Taiwan.

China, in turn, was ready to merge the BRI with Vision-2030 of the Kingdom — an initiative to diversify its economy.

Huawei — a telecom giant which is facing a boycott campaign by the Donald Trump administration — made a resounding statement during the visit that Saudi Arabia would be among the first to receive its most advanced 5G wireless technology.

China’s offer was greased with a deal with Saudi Aramco to set up a $10 billion refinery in the country’s northeast Rust Belt.

Pakistani Islamists camp out in Islamabad, urge PM to quit

Thousands of members of an Islamist party have camped out in Pakistan’s capital, demanding the resignation of Prime Minister Imran Khan over economic hardships. Leading the caravan of hundreds of cars and buses, Maulana Fazlur Rehman, the leader of the Jamiat Ulema-e-Islam party, began his “Azadi March” from the southern city of Karachi last Sunday. […]

‘Stay at home for the country’

For people who have braved a war for 30 years, living in camps and amid fear, staying at home in the wake of pandemic cannot be difficult, Sri Lankan Prime Minister Mahinda Rajapaksa said, urging citizens to stay at home for the country’s sake. Also read: Coronavirus | South Asia waging a defensive war against […]