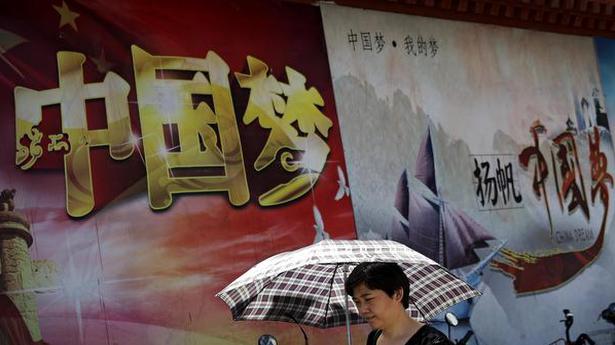 Over 370 top officials of China’s ruling Communist Party on Monday began the much-delayed four-day plenary session, regarded as a politically significant conclave for President Xi Jinping due to the growing unease in the party ranks over protests in Hong Kong, trade war with the U.S. and slowdown of the economy.

The closed door meeting of the plenary also known as plenum began this morning here with Mr. Xi, 66, who emerged as the most powerful leader after Mao Zedong since he came to power in 2012 doubling up as General Secretary of the Communist Party of China (CPC) and head of the military besides Presidency, presenting a work report.

Mr. Xi delivered the work report and explained a draft document of the CPC Central Committee’s decision on major issues concerning how to uphold and improve the system of socialism with Chinese characteristics and advance the modernisation of China’s system and capacity for governance, the state-run Xinhua news agency reported.

While much of the deliberations of the plenum would remain confidential, observers say a host of issues including the prolonged violent protests in Hong Kong which now entered the 21st week, the phase one deal next month to end the over year-long bruising trade war with the U.S. and continued slowdown of China’s economy were expected to figure in the agenda.

On the foreign policy front, informed sources said Mr. Xi’s recent visit to Mamallapuram for his second informal summit with Prime Minister Narendra Modi is also expected to figure at the meeting.

China is also deeply concerned over the aggressive U.S. policy to strategically contain its efforts to expand global influence through initiatives like the multi-billion-dollar Belt and Road Initiative (BRI).

The plenary session comprising roughly over 370 members of the Central Committee is a high-powered decision making body. It mostly consists of senior party leaders, officials of the military and heads of the state-owned enterprises.

This is the fourth plenary session after the 2017 party congress which ushered in Mr. Xi’s second term in office. The last plenum was held in February, 2018.

The meeting is long overdue as typically CPC holds seven plenums in five years to periodically to review the policies of the leadership.

“It is the first full meeting of the Central Committee in nearly 20 months, the longest interval between two plenums in recent decades”, the Hong Kong-based South China Morning Post reported last week.

“The wait, seen by some China-watchers as a delay, has fuelled much speculation about discord within the party, as it grapples with headwinds from a trade war with the United States, slowing economic growth and political crisis in Hong Kong,” it said.

Ahead of the meeting, speculation is rife about the lack of shared views among the top echelon of the party about the crisis faced by China on various fronts.

Observers say the significance of the top decision-making bodies of the CPC declined in recent years considering Mr. Xi’s emergence as the most powerful leader since he took over the leadership in 2012 firmly established his stamp of authority, doing away with the past system of collective leadership.

The number of deaths from a coronavirus epidemic in China rose by 46 to 259 on Friday, the country’s health authority said on Saturday, as the United States announced new border curbs on foreign nationals who have been in China. The province of Hubei, the center of the epidemic, remains under virtual quarantine, with roads […]

U.S. President Donald Trump has said Google CEO Sunder Pichai assured him that the tech giant is “totally committed” to the U.S. military and not the Chinese Army as the President met him at the White House, days after he accused the California-based company of not supporting American interests. Mr. Trump earlier this month said, […]

A fire at Toronto Pearson International Airport has caused officials to cancel all U.S.-bound flights from Terminal 1. The blaze broke out in the terminal on Sunday evening and the area was evacuated. The airport announced in a tweet that all flights to the U.S. scheduled to depart from Terminal 1 had been cancelled. The […]