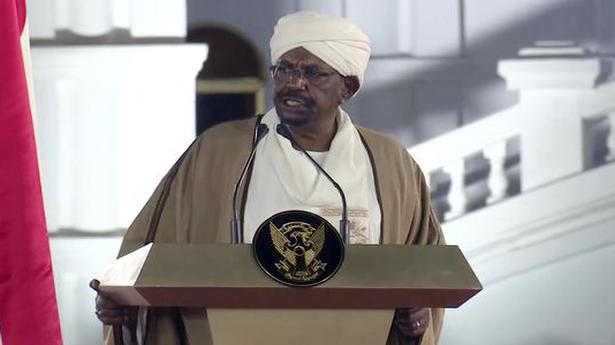 Here are key dates in Sudan since Omar al-Bashir seized power three decades ago, after he was ousted on Thursday by the military following months of protests against his iron-fisted rule.

1989: In June 1989 army brigadier Mr. Bashir and a group of officers seize power in a coup backed by Islamists, toppling the elected government.

2003: A rebellion erupts in 2003 in the western region of Darfur, which complains of economic and political marginalisation.

The conflict goes on to kill 300,000 people and displace nearly 2.5 million, according to UN figures, before diminishing.

The International Criminal Court (ICC) in 2009 indicts Mr. Bashir for war crimes and crimes against humanity in Darfur, and a year later for genocide. He denies the charges.

2005: Khartoum signs a peace treaty in 2005 with rebels in the south of the country, ending a 21-year civil war that left two million people dead.

The agreement schedules a referendum on independence for 2011.

2010: In 2010 Mr. Bashir is elected in the first multi-party elections since 1986, but voting is boycotted by the opposition and criticised abroad. He is re-elected in 2015.

The Sudan People’s Liberation Army-North launches insurgencies in the states of South Kordofan and Blue Nile.

2012: In early 2012 fighting breaks out along the border between Sudan and South Sudan over oil fields in an area claimed by both.

South Sudan shuts off oil production for more than a year, hitting both economies.

2017: In October 2017 the United States ends its 20-year-old trade embargo against Sudan, imposed over alleged support for Islamist militants.

It does not drop Sudan from its blacklist of “state sponsors of terrorism”.

2018: In early 2018 demonstrations erupt over soaring food prices. They are swiftly dispersed and opposition leaders and activists rounded up.

In August the ruling party nominates Mr. Bashir as its candidate for the 2020 presidential election, despite the constitution’s two-term limit.

In December protests begin in several towns after the government triples the price of bread, soon turning into rolling nationwide anti-government rallies.

2019: The demonstrations continue into 2019, with authorities accused of a harsh crackdown in which several dozen people are killed.

On February 22 Mr. Bashir declares a state of emergency and dissolves the government.

Demonstrations continue, focussed on the army headquarters in Khartoum where thousands set up camp on April 6 to demand military support for the removal of Mr. Bashir.

On April 11 the army announces it has ousted Mr. Bashir and put him under arrest, with a transitional military council to be established to run the country for the next two years.

British Prime Minister Theresa May’s plan to hold talks with Leader of the Opposition Jeremy Corbyn, in an effort to break the Brexit deadlock, has received a cautious welcome from EU officials. However, a new political battle has erupted in the Conservative Party as many within it expressed their outrage at the decision to engage […]

Michael Bloomberg faced a barrage of attacks at his first Democratic presidential debate on Wednesday, as his rivals assailed the free-spending and fast-rising billionaire over his record on race, history of sexist comments and the use of his massive fortune to muscle his way into the contest. In a rough debate début that gave voters […]