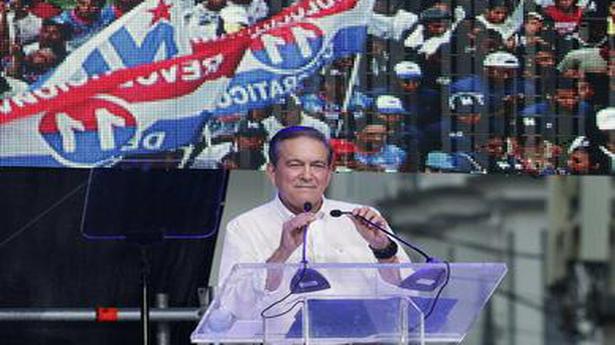 After scrutinizing the results from 92% of polling stations, electoral court magistrate Heriberto AraŴz said in a televised announcement shortly before midnight that Mr. Cortizo had a narrow lead of 2 percentage points over his rival Rūmulo Roux. The unexpectedly close race pitted the candidates of the two most important opposition political forces in the Central American country.

Mr. Cortizo, of the Democratic Revolutionary Party, had 33% of the votes versus 31% for Roux, from former President Ricardo Martinelli’s Democratic Change party. AraŴz said the voting trend remained stable as results came in.

After announcing the results, AraŴz took the phone and dialed the candidate, who was waiting at a campaign point with his wife Yazmţn and supporters. “You are the virtual winner of the elections for the next five years,” AraŴz said.

“With humility I receive the announcement, which is important for the country,” Mr. Cortizo told the magistrate during the call. “An announcement of great responsibility.”

The PRD, which has social democratic leanings, will return to power for the third time since the transition to democracy three decades ago, after the end of the military regime. The last time it in power was from 2004 through 2009 during the administration of Martţn Torrijos.

There is no runoff in Panama, so the top vote-getter in the field of seven mostly business-friendly candidates wins outright.

New Zealand police detained four people on Friday after mass shootings at two mosques in the city of Christchurch. “Four are in custody. Three are men and one is a woman,” New Zealand Police Commissioner Mike Bush told reporters in Wellington. “There were a few reports of IEDs strapped to vehicles which we were able […]