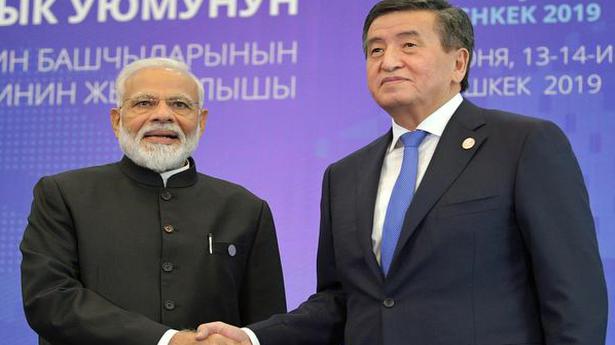 In a veiled attack on Pakistan, Prime Minister Narendra Modi on Friday said that countries sponsoring, aiding and funding terrorism must be held accountable as he called for a global conference to combat the menace.

Addressing the Shanghai Cooperation Organisation (SCO) Summit here, Mr. Modi highlighted the spirit and ideals of the SCO to strengthen cooperation in the fight against terrorism.

India stood for a terrorism-free society, he said.

To combat the menace of terrorism, countries will have to come out of their narrow purview to unite against it, Mr. Modi said in the presence of his Pakistani counterpart Imran Khan.

He also urged the SCO leaders to organise a global conference on terrorism.

Mr. Modi arrived in the Kyrgyz capital on Thursday for the two-day SCO summit. The SCO is a China-led 8-member economic and security bloc with India and Pakistan being admitted to the grouping in 2017.

Taliban militants have kidnapped 27 peace activists from a highway in Afghanistan’s western Farah province, local officials and peace activists said on Wednesday. Massoud Bakhtawar, the Deputy Governor of Farah, said the activists were travelling in six cars from Herat to Farah on Tuesday evening when their convoy was stopped by the Taliban on a […]

A man in the Spanish region of Valencia has died from coronavirus, marking the country’s first death from the outbreak, a local health official said on Tuesday. Tests carried out post-mortem showed the man, who died on February 13, was killed by the virus, regional health chief Ana Barcelo told reporters.   News of the […]

South African Indian-origin singer Vandana Naran has been flooded with congratulatory messages after the launch of a CD featuring the Hanuman Chalisa in six different musical variations. Ms. Naran performed some of the items live at the annual United Hanuman Chalisa held in Lenasia, the sprawling Indian township south of Johanensburg, on Sunday, where bhajan […]