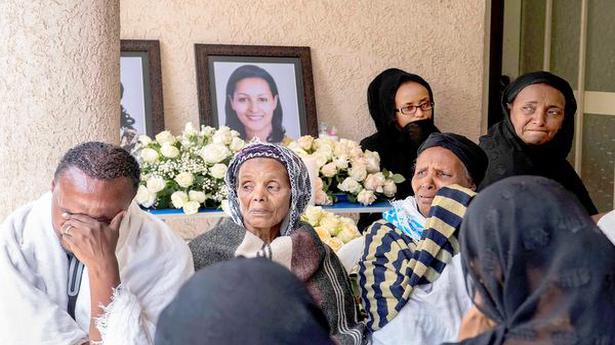 Airlines in Ethiopia, China and Indonesia grounded Boeing 737 MAX 8 jets Monday as investigators recovered the black boxes from a brand-new passenger jet that crashed outside Addis Ababa a day earlier, killing all 157 people on board.

The Nairobi-bound plane smashed into a field just six minutes after take-off as the pilot alerted controllers of “difficulties”.

Hopes were raised on Monday of finding answers for the deaths of people from 35 countries, including two dozen UN staff, that prompted Ethiopia to declare a day of mourning. “After tedious search by the rescue and investigation team… Ethiopian Airlines announces that the Digital Flight Data Recorder (DFDR) and Cockpit Voice Recorder (CVR) of ET302 have been recovered,” the state-owned carrier said in a statement, using the flight number.

The airline, Africa’s largest, added that it had grounded its fleet of six remaining Boeing 737 MAX 8 planes pending information “assumed to be found from the black box data”. This followed on the heels of China, which ordered domestic airlines to suspend commercial operation of the Boeing 737 MAX 8. There were eight Chinese nationals among the 149 passengers and eight crew on board the ill-fated flight.

Indonesia, which has 11 of the planes, said it would “carry out inspections and temporarily prohibit Boeing 737 Max 8 from flying”.

Boeing has described the MAX series as its fastest-selling airplane ever, with more than 5,000 orders placed to date from about 100 customers. State-owned Ethiopian Airlines had ordered 30 MAX 8 jets in total, and China has received 76 from an order of 180.

The plane that crashed on Sunday was less than four months old. It had been delivered on November 15, Ethiopian Airlines said.

The jet fell near the village of Tulu Fara, some 60 km east of Addis Ababa. Witness Tegegn Dechasa said “the plane was already on fire when it crashed to the ground. The crash caused a big explosion.” Another, farmer Sisay Gemechu, said: “The plane seemed to be aiming to land at a nearby level open field, but crashed before reaching there.”

As Ethiopia prepared to receive loved ones seeking victims’ remains and belongings, a UN gathering in Nairobi opened under a shadow.

At least 22 staff from different UN agencies were on the flight, many headed for an annual assembly of the UN Environment Programme.

Delegates arrived with the UN flag flying at half-mast, hugging and comforting one another as they wondered who among the staff may have been on the plane. Nairobi hosts the global headquarters of UNEP and UN-Habitat, and is the regional seat of other UN agencies.

Congress determined to get access to Trump’s phone call with Putin, other world leaders

Congress is determined to get access to Donald Trump’s calls with Russian President Vladimir Putin and other world leaders, the US House Intelligence Committee’s chairman said on Sunday, citing concerns that the Republican president may have jeopardized national security. I think the paramount need here is to protect the national security of the United States […]

India will once again press its case for a waiver of United States’ sanctions on the $5.4 billion Russian S-400 Triumf anti-missile deal, but will discuss Washington’s concerns over the issue during talks with Secretary of State Mike Pompeo on Wednesday. On a visit to Delhi to prepare for the Trump-Modi meeting this weekend, Mr. […]