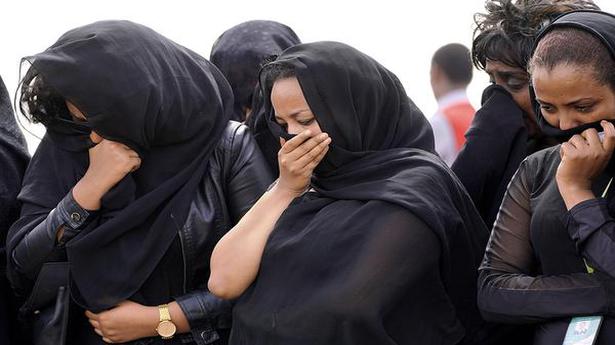 Investigators in France took possession of the crashed Ethiopian Airlines jet’s black boxes on Thursday, seeking clues into a disaster that has grounded Boeing’s global 737 MAX fleet and left scores of families mourning and angry.

Relatives of the dead stormed out of a meeting with Ethiopian Airlines on Thursday, decrying a lack of transparency, while others made the painful trip to the crash scene. “I can’t find you! Where are you?” said one Ethiopian woman, draped in traditional white mourning shawl, as she held a framed portrait of her brother in the charred and debris-strewn field. Nations around the world, including an initially reluctant United States, have suspended the 371 MAX models in operation, though airlines are largely coping by switching planes.

Another nearly 5,000 MAXs are on order, meaning the financial implications are huge for the industry.

After an apparent tussle over where the investigation should be held, the flight data and cockpit voice recorders arrived in Paris and were handed over to France’s Bureau of Enquiry and Analysis for Civil Aviation Safety (BEA) agency. A BEA spokesman said he did not know what condition the black boxes were in. “First we will try to read the data,” he said, adding that the first analyses could take between half a day and several days.

The investigation has added urgency since the U.S. Federal Aviation Administration (FAA) on Wednesday grounded the 737 MAX aircraft citing satellite data and evidence from the scene indicating some similarities and “the possibility of a shared cause” with October’s crash in Indonesia that killed 189 people.

The Bangladesh High Commission in Islamabad has stopped issuing visas to Pakistani nationals for one week over a fresh diplomatic row, a Bangladeshi official said on Tuesday, amid strained bilateral ties since 2013 when Dhaka decided to hang several of the 1971 war criminals. Last year, Dhaka denied visa to the Pakistan High Commissioner. The […]

Malaysia filed criminal charges on Friday against 17 more current and former directors at three Goldman Sachs subsidiaries for their role in the alleged multibillion-dollar ransacking of state investment fund 1MDB. Malaysian and U.S. prosecutors allege that bond sales organized by Goldman Sachs for 1MDB provided one of the means for associates of former Malaysian […]

Pakistan warns India against diverting water flow, says it would be act of aggression

Pakistan said on Thursday that it has “exclusive rights” over three Western rivers and any attempt by India to divert the flow of these rivers would be considered an “act of aggression”. Foreign Office spokesperson Mohammad Faisal made the remarks during his weekly media briefing here in response to a question regarding Prime Minister Narendra […]