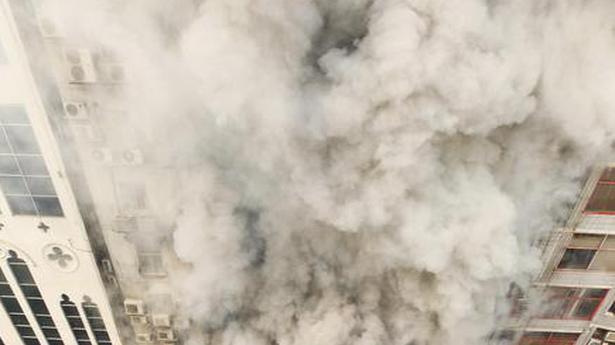 A Bangladeshi housing official said on Friday criminal charges would be filed against the owner of a building where a fire killed 25 people and which had four upper floors constructed illegally.

Minister for Housing and Public Work S.M. Rezaul Karim also pledged to take action against officials in his ministry if they were guilty of wrongdoing associated with allowing the added floors or other violations.

Raising buildings beyond approved design is rampant in Bangladesh, where the government is seeking fast economic development and the private sector is expanding.

The blaze that burned for several hours on Thursday trapped people inside the building, some shouting for help from windows on upper floors and the roof. By Friday morning, no smoke was visible at the FR Tower on a busy avenue in Dhaka’s Banani commercial district.

Mostak Ahmed, a deputy commissioner of Dhaka Metropolitan Police, told on Friday that the death toll rose to 25 with all but one identified. Based on information provided by relatives, no one appeared to still be unaccounted for, he said. “Still we are checking, if someone comes to us we will verify,” he said.

The fire injured about 70 people, many of them now being treated at Dhaka Medical College Hospital’s burn unit.

The fire was the latest in a country where crowding, flouted building regulations and safety norms have made deadly blazes common.

Last month, a fire in the oldest part of Dhaka, a 400-year-old area cramped with apartments, shops and warehouses, left at least 67 people dead.

In 2012, a fire at a garment factory killed at least 112 people trapped behind its locked gates. Less than six months later, another building containing garment factories collapsed, killing more than 1,100 people.

Another fire in a house illegally storing chemicals in Old Dhaka killed at least 123 people in 2010.

President Donald Trump’s taxes show that he lost $1.17 billion over a decade starting in the mid-1980s, The New York Times reported on Tuesday. Mr. Trump’s apparent losses are greater than nearly any other individual American taxpayer, so much so that he managed to avoid paying income taxes for eight of the 10 years. Mr. […]

Worldwide, the virus has infected more than 5.6 million people and killed over 350,000, with the U.S. having the most confirmed cases and deaths by far, according to a tally by Johns Hopkins University Source: thehindu.com Related

A massive explosion rocked central Kabul late Monday, killing at least five people in a Taliban-claimed attack near an international complex while the U.S. special envoy leading talks with the insurgents visited the Afghan capital. The blast took place in a residential area near Green Village, a large compound that houses aid agencies and international […]