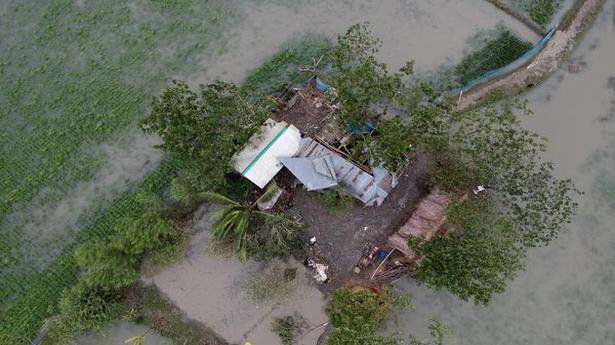 At least ten people were killed and 25 were injured as Cyclone Bulbul smashed into the low-lying areas of Bangladesh on Sunday, bringing in its wake torrential rains coupled with howling gales.

The cyclone packed winds of up to 120 kilometres per hour (kph) when it made a predawn landfall before weakening into a deep depression, forcing the authorities to evacuate over 21 lakh people from the low-lying areas of the country.

Disaster Ministry secretary Shah Kamal said they initially planned to evacuate 14 lakh people to 5,000 cyclone shelters. However by Saturday midnight, the figure rose to over 21 lakh.

The authorities have ordered a temporary ban on boat and ferry movements in internal riverine routes and coastal waters, besides closing air traffic operations near coastal airports for nearly 24 hours.

At least eight people in seven coastal districts have been reported dead from a combination of falling trees, collapsed houses and illness after Cyclone Bulbul ripped through southern Bangladesh, bdnews24.com reported.

The health directorate’s Health Emergency Operation Centre and Control Room confirmed the death toll on Sunday, the report said, adding that 25 people have been injured due to the cyclonic storm.

The met office on Saturday issued its highest “great signal numbers” 10 and 9 for the southwestern and southeastern coastlines, prompting authorities to launch a massive evacuation campaign. The Met office on Sunday lowered the number to 3.

The government suspended weekend leave for government officials in 13 coastal districts on Saturday.

Troops of the army were also called in to supplement preparedness for the cyclone.

The Sindh government challenged the high court judgment and on May 2 the slain journalist’s parents also approached the Supreme Court against the acquittal of the convicts. Source: thehindu.com Related

Pope Francis is wrapping up his visit to Mozambique by meeting with HIV-infected mothers and children at a Catholic Church-run hospital in one of the countries hardest hit by the AIDS epidemic. The Zimpeto Hospital is the latest to be opened by the Sant’Egidio community, a Rome-based charity that helped broker Mozambique’s 1992 peace accord […]