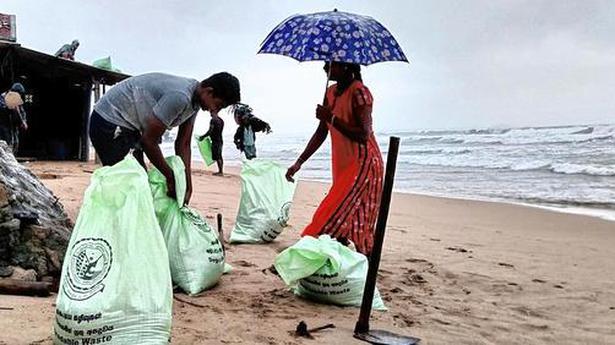 At least 12,000 residents of Sri Lanka’s Northern and Eastern provinces were severely affected as heavy rain lashed the region while cyclone Burevi made a landfall on Wednesday night. The maximum rainfall — 279.8 mm in the last 24 hours — was recorded in Kilinochchi district.

Incessant rainfall continued on Thursday as the cyclone moved towards Mannar district located on the island’s northwest coast, before heading towards south India.

Some tile-roofed homes of families who were displaced during the civil war and returned in recent years were badly damaged, with the roofs collapsing during the cyclone and strong winds, images shared on social media showed. In the Eastern Province too, authorities had evacuated several hundreds, fearing severe damage.

“The situation is returning to normal, but we have urged residents in the area to remain vigilant and avoid venturing out to the seas,” Mr. Koippili said in a media statement. Asked if there was any fear of flooding, he told The Hindu: “There could be flash floods and inundation in some low-level areas. We are working swiftly to ensure relief reaches affected families at the earliest.”

The local Sunday Times paper reported that at least four fishermen from the Northern Province were missing since Wednesday.

From activist Greta Thunberg of Sweden to conservation scientist Krithi Karanth from India, Swiss town Davos will host many climate actvists, scientists this week. Going by the theme of the 50th Annual Meeting of the World Economic Forum, which calls itself an international organisation for public-private partnership, more than 3,000 global leaders will assemble here […]

Sri Lanka on Tuesday lifted a social media ban that was imposed after the Islamic State-claimed Easter bombings, a sign of security easing even as some of the island nation’s South Asian neighbours investigated possible activities in their countries inspired by the attack. President Maithripala Sirisena ended the blocking of Facebook, WhatsApp, YouTube and other […]