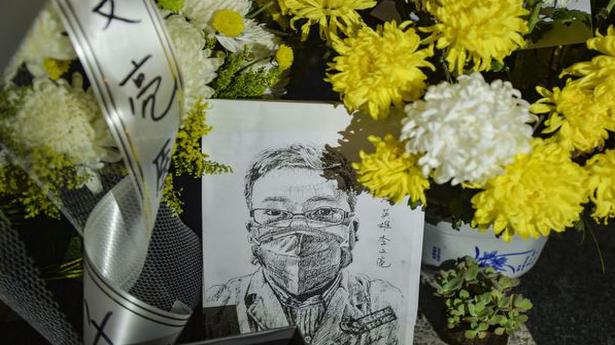 The death of a whistleblowing doctor who was reprimanded for warning about the new coronavirus has sparked rare calls for political reform and free speech in China.

Li Wenliang, an ophthalmologist in Wuhan — ground zero of China’s virus epidemic which has killed more than 800 — succumbed to the disease on Friday over a month after he first raised alarm about the SARS-like virus.

He was among eight physicians punished by Wuhan police for “rumour-mongering”.

But after his death struck a collective nerve, a number of academics have spoken up to demand more freedoms in China.

At least two open letters demanding free speech have circulated on social media since the 34-year-old’s death — one signed by 10 professors in Wuhan.

Li’s efforts “vigorously maintained the interests of the country and society”, read that letter, which has since been censored on Weibo, China’s Twitter-like social media site.

“Put an end to the restrictions on freedom of speech,” it demanded, and “openly apologise” to Li and the seven other doctors punished for discussing the emergence of the virus in December.

The other letter — signed on Friday by an anonymous group of alumni from the prestigious Tsinghua University in Beijing — called on authorities to “guarantee the constitutional rights of citizens”.

“Resolutely oppose making political security the top priority — that is an extremely selfish goal of a small organisation!” it said.

The letters are a rare call for political reform in China, a country where dissidents are often jailed and criticism of the government is quickly scrubbed.

Many references to the two letters had been removed from Weibo by Sunday.

While the World Health Organization and other experts have heaped praise on China, saying it took decisive steps to try to contain the virus, critics say precious time was lost by early inaction from the local government.

Li — diagnosed with the virus on February 1 — said in a Weibo post in late January that local police had forced him to sign a statement agreeing not to commit any more “law-breaking actions”.

He said police had summoned him after he saw test results from some patients suggesting a SARS-like virus and reminded colleagues in a group chat to take stronger precautions.

Since his death, Beijing has sought to quell public anger by positioning the doctor as a hero.

Criticism is being deflected towards local authorities in Hubei province who are taking the bulk of public anger over the handling of the epidemic.

China’s anti-graft watchdog announced Friday it was sending a team to Wuhan where it would investigate “issues involving Dr Li Wenliang reported by the masses”.

“It sends a clear message that the central authorities are determined to get to the truth and hold those responsible accountable,” said the state-run China Daily newspaper in an editorial on Friday.

Meanwhile Cui Tiankai, China’s ambassador in the United States, said he was “really saddened” by the doctor’s death.

“We are so grateful to him for what he has done in our joint efforts” fighting the virus, Cui tweeted.

SpaceX celebrated the successful launch on Saturday of a new astronaut capsule on a week-long round trip to the International Space Station — a key step towards resuming manned space flights from U.S. soil after an eight-year break. This time around, the only occupant on board SpaceX’s Crew Dragon capsule was a dummy named Ripley […]

The White House declared Sunday it would not participate in the first impeachment hearings before the House Judiciary Committee as Democrats prepared to approve their report Tuesday making the case for President Donald Trump’s removal from office. The Democratic majority on the House Intelligence Committee says its report will speak for itself in laying out […]

Hang Pervez Musharraf’s body at Islamabad chowk for 3 days if he dies before execution: Pakistan court

A Pakistan special court issued a bizarre but apparently symbolic order for former military ruler Pervez Musharraf on Thursday, saying his corpse should be dragged to parliament and hang for three days if he dies before his execution. The court sentenced Musharraf to death on Tuesday after finding him guilty of high treason for subverting […]