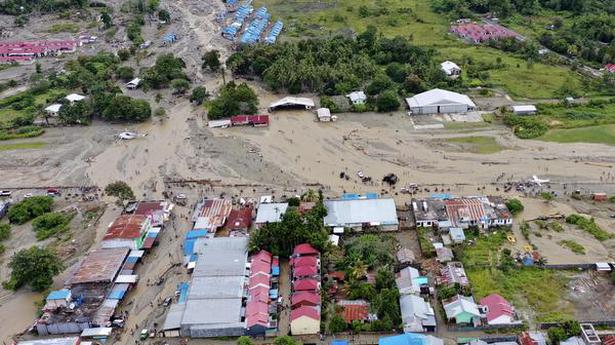 The death toll from flash floods and mudslides triggered by torrential downpours in Indonesia’s easternmost province has risen to 89, with dozens of others missing, officials said on March 19.

National Disaster Mitigation Agency spokesman Sutopo Purwo Nugroho said the worst-hit area from the flooding was Sentani subdistrict, where tons of mud, rocks and trees from a landslide on a mountain rolled down to a river that burst its banks, sweeping away residents.

The number of dead is expected to rise as rescue workers comb through affected areas.

More than 1,600 rescuers, including soldiers and police, faced difficulties on Tuesday in clearing huge piles of debris due to shortages of heavy equipment, said Papua military spokesman Col. Muhammad Aidi.

“We face difficulties removing debris and the bodies under rubble as we don’t have enough excavators,” Aidi said, adding that rescuers were searching for 74 people reportedly missing and feared dead.

Nugroho said about 7,000 residents were displaced from their homes, with more than 400 houses and other buildings damaged and thousands of others submerged.

Seasonal downpours cause frequent landslides and floods that kill dozens each year in Indonesia, a chain of 17,000 islands where millions of people live in mountainous areas or near fertile flood plains.

One person was lightly injured in an explosion outside the Danish Tax Agency’s office in Copenhagen late on Tuesday in what the police said was a deliberate attack, although it was too early to know who was behind it. The blast, which occurred around 10.15 p.m., shattered glass doors and windows and scorched metal cladding […]

A tour bus carrying dozens of Chinese passengers crashed in Laos, killing at least 13, officials said Tuesday. The bus was carrying 44 Chinese when it careened off a road between the Lao capital, Vientiane, and the northern tourist town of Luang Prabang on Monday, the Chinese Embassy in Vientiane said on its website. In […]

Police in Pakistan’s Punjab province has claimed to have arrested an “Indian spy” in the town of Dera Ghazi Khan. Quoting police, local media reported that they arrested an Indian national who “admitted” himself to be a spy. Spying is punishable by death in Pakistan. Police said the accused, identified as Raju Lakshman, was arrested […]