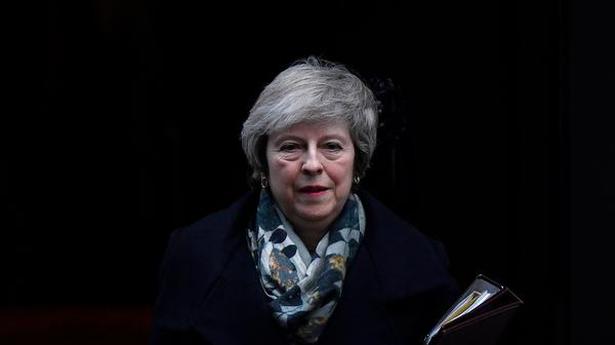 British Prime Minister Theresa May on Wednesday expressed “regret” in Parliament for the Jallianwala Bagh massacre, ahead of the 100th anniversary of the killings on April 13.

Opening the Prime Minister’s Questions on Wednesday with a reference to the massacre, Ms. May quoted Queen Elizabeth’s remarks, calling the incident a “distressing example” of Britain’s past history with India. “We deeply regret what happened and the suffering caused,” Ms. May said.

This came came after MPs from across the political parties called for the formal apology during a debate on Tuesday afternoon.

Foreign Office Minister Mark Field had told MPs on Tuesday that he recognised that there was a “strong and compelling case” for Britain to go beyond the “deep regret” already expressed.

The Labour Party on Wednesday called for a “full, clear and unequivocal apology”, from the British government for the Jallianwala Bagh massacre, after the Prime Minister described the events as a “shameful scar on British Indian history”, but failed to make the formal apology that many hope for.

On Wednesday, 80 MPs wrote to Foreign Secretary Jeremy Hunt calling for an apology, pointing to the “lasting pain both in India and among U.K. citizens with family roots in India.”

MPs had suggested that an apology was owed to the victims and their families as part of efforts to strengthen relations with India. “India will never forget,” Conservative MP Bob Blackman, who introduced the debate on Tuesday told MPs.

Others argued that there was a need for the U.K. to raise awareness of the atrocity and the darker aspects of Britain’s colonial legacy in schools, which would help children understand where they came from and where the country was today.

“By othering or writing people out of history, can we really be surprised that hate crime continues to exist or racism continues to fester?” asked Preet Kaur Gill, the Labour MP for Birmingham Edgbaston. Over 80 MPs from across political parties signed a letter, initiated by Labour MP Pat McFadden, on Wednesday calling for an “official apology.”

Perils of doing nothing

“Some might ask, why just this atrocity? Yet it is never a good argument to say that because you cannot do everything, you should do nothing,” they wrote.

“Relations between the U.K. and India today are friendly and constructive. Yet, that does not mean that an apology would not do good… we cannot turn back or erase the past, but we can take steps to recognise what happened and to respond in a way that befits a modern relationship between two countries which today enjoy normal and positive diplomatic relations.”

The death toll in Spain surged to 4,089 after 655 people died within 24 hours, the Health Ministry said on Thursday. It was a 19% rise on figures released on Wednesday in Spain, which has the world’s second highest death toll from the disease after Italy. The number of confirmed cases of COVID-19 rose to […]

Contrary to Pakistan’s claims that both the UAE and Saudi Arabia support its stand on the issue of Kashmir, UAE Minister for Foreign Affairs and International Cooperation Sheikh Abdullah Bin Zayed Bin Sultan Al Nahyan made it clear to his Pakistani counterpart Shah Mahmood Qureshi that Kashmir is a bilateral issue between India and Pakistan. […]