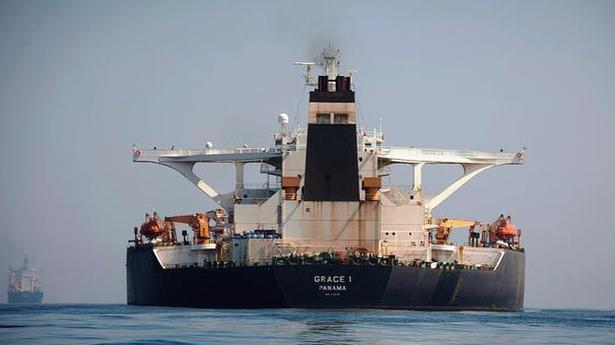 Gibraltar on Thursday allowed a detained Iranian supertanker to leave the British overseas territory after a last-minute U.S. attempt to seize the vessel, potentially defusing tensions between London and Tehran as a British-flagged tanker remains held by the Islamic Republic.

The release of the Grace 1 comes after the U.S., under President Donald Trump, pulled out of Iran’s nuclear deal with world powers over a year ago, setting in motion a growing confrontation between Tehran and the West over its atomic programme. In past weeks, the Gulf region has seen six attacks on oil tankers that the U.S. has blamed on Iran and the downing of a U.S. surveillance drone by Iranian forces. Iran has denied being behind the tanker attacks, though it has seized other tankers.

The Gibraltar Chronicle newspaper reported there was no U.S. application before the court when a hearing on the Grace 1 resumed Thursday afternoon, quoting the court’s Chief Justice, Anthony Dudley. That allowed the ship to be freed.

That’s a stark change from a morning hearing, which saw Gibraltar say the Justice Department sought to seize the vessel “on a number of allegations”.

Justice Dudley said that were it not for the U.S. move, “the ship would have sailed”, the Chronicle reported.

The Justice Department did not respond to requests for comment.

Britain’s Foreign Office said in a statement that the “investigations conducted around the Grace 1 are a matter for the government of Gibraltar” and that it couldn’t comment further.

Prime Minister Boris Johnson’s Downing Street office said Iran was discussed during the U.K. leader’s meeting with Mr. Trump’s National Security Adviser John Bolton earlier in the week, though no details were released on the talks.

The Grace 1, carrying 2.1 million barrels of Iranian crude, was seized last month in a British Royal Navy operation off Gibraltar. The vessel was suspected of violating EU sanctions on Syria, namely its Banyas refinery, where the Grace 1’s cargo was allegedly headed, according to authorities in Gibraltar. Iran called the seizure an “act of piracy”.

Signalling preparations for the expected release of the ship, the captain, an Indian national, and three officers of the Grace 1 were released from detention on Thursday, the government said. The whereabouts of the released crew, none of whom are Iranian, were not immediately known. The crew of the Grace 1 includes sailors from India, Pakistan and Ukraine.

Beyond a few Gibraltar-flagged patrol boats, an Associated Press crew saw little security around the tanker on Thursday as speculation mounted over its impending release. A handful of men could be seen from a distance on the deck, some of them carrying binoculars and looking into the horizon.

This is the second time the Trump administration has moved to seize a ship in recent months. In May, the Justice Department announced that it had seized a North Korean cargo ship used to supply coal to the isolated nation in violation of international sanctions.

Tensions have escalated in the Gulf since Mr. Trump over a year ago unilaterally withdrew the U.S. from Iran’s 2015 nuclear deal with world powers. The decision stopped billions of dollars’ worth of business deals, largely halted the sale of Iran’s crude oil internationally and sharply depreciated Iran’s currency, the rial.

Myanmar’s Supreme Court on Tuesday rejected the final appeal of two Reuters journalists and upheld seven-year prison sentences for their reporting on the military’s brutal crackdown on Rohingya Muslims. Wa Lone and Kyaw Soe Oo earlier this month shared with their colleagues the Pulitzer Prize for international reporting, one of journalism’s highest honors. The court […]

France is to clear out some migrant tent camps, impose quotas for migrant workers and deny newly-arrived asylum seekers access to non-urgent healthcare, in a drive to show voters President Emmanuel Macron is heeding their concerns about immigration. “We want to take back control of our immigration policy,” Prime Minister Edouard Philippe, a Macron appointee, […]

At least 36 people were killed when a bus collided with a truck on an expressway in eastern China, authorities said on Sunday. A bus with 69 people on board crossed into the opposite lane and hit the truck on Saturday morning, the Yixing city information office said in a social media post. Initial investigation […]