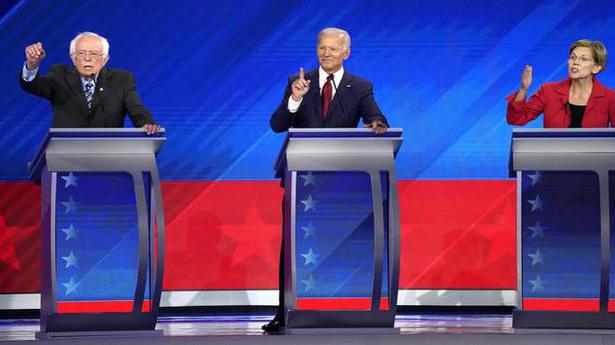 The divide among the candidates over the proposal known as Medicare for All, which would cover every American under a government health plan and essentially eliminate private insurance, was again laid bare in the opening moments of the Democratic Party’s third presidential debate in Houston.

But after some sharp exchanges, several of the White House contenders warned that too much acrimony would distract them from the ultimate goal: defeating Republican President Donald Trump next year.

Here are some early highlights from the debate:

The first question of the night went to Mr. Biden, asking him whether liberals like Ms. Warren and Mr. Sanders had gone too far left for mainstream Democrats.

Mr. Biden quickly pivoted to healthcare, challenging Mr. Sanders of Vermont and Ms. Warren of Massachusetts to explain how they plan to pay for what some analysts expect would be a $30 trillion Medicare for All plan.

“Thus far, my distinguished friend, the senator on my left, has not said how she’s going to pay for it,” said Mr. Biden, referring to Ms. Warren.

Both Ms. Warren and Mr. Sanders were careful to avoid saying explicitly that middle-class families would see higher taxes, instead emphasizing that they would save money overall by eliminating medical costs.

Mr. Sanders acknowledged the cost of his signature plan but said studies show the status quo will cost Americans $50 trillion over the same time period.

“I wrote the damn bill, if I may say so,” he said, repeating his main applause line from the second debate in July.

Mr. Biden emphasized again that his plan would allow people who like their private insurance to keep it, a key point of distinction from Mr. Sanders’ and Ms. Warren’s approach.

“Americans don’t want to pay twice as much as other countries,” Mr. Sanders shot back.

Medicare for all: a bold idea or a bad idea?

Other candidates seeking to make their mark on the stage also took aim at Sanders’ Medicare for All plan.

U.S. Senator Amy Klobuchar of Minnesota, who has run as a moderate, said Sanders’ proposal would force millions of people off their insurance plans.

South Bend, Indiana, Mayor Pete Buttigieg sought to contrast his proposal to offer a government plan as an alternative, which he describes as “Medicare for all who want it,” with Sanders’ more sweeping reform.

“The problem is that it doesn’t trust the American people,” he said of the senator’s plan. “I trust you to choose what makes the most sense for you.”

U.S. Senator Kamala Harris of California, who has released her own Medicare for All plan, redirected the conversation toward Trump, noting that the current administration has sought to strike down the entire Affordable Care Act, commonly known as Obamacare, in federal court.

“I think this discussion has given the American people a headache,” she said. “What they want to know is that they’re going to have healthcare and the cost.”

Although the candidates had a heated discussion about healthcare in the first 40 minutes of the debate, several stressed the importance of standing together as Democrats, saying fighting one another would play into Trump’s hands.

Moments after former U.S. Housing Secretary Julian Castro, 44, of Texas accused Biden, 76, of forgetting what he had just said two minutes ago a comment seemingly aimed at Biden’s age that many in the audience jeered Buttigieg called for civility.

“This is why presidential debates are becoming unwatchable,” Buttigieg said. “This reminds everybody of what they cannot stand about Washington. Scoring points against each other, poking at each other.”

That sentiment was echoed by U.S. Senator Cory Booker of New Jersey, who said while they had differences on how to pay for and deliver healthcare, every person on stage believed in universal care.

“We cannot sacrifice progress on the altar of purity,” he said.

In Pakistan, the problem of forced conversions

For the Hindus of Sindh in Pakistan, March 20, the day Holi was celebrated, was a riot of colours. But for the Meghwars, it marked the beginning of a nightmare when two sisters, Reena Meghwar and Raveena Meghwar, suddenly disappeared from their home in Daharki, a city in Ghotki district of Sindh. Their disappearance not […]

Twitter said on Tuesday world leaders are “not above” the rules of the online platform and could see their messages removed or demoted for egregious conduct violating its terms of service. In a statement aimed at clarifying its policies, Twitter said it reserves the right to take “enforcement action” on offending tweets, notably those including […]

France shuts down as thousands protest against pension overhaul

A nationwide strike brought much of France to a standstill on Thursday as tens of thousands hit the streets to protest a pension overhaul by President Emmanuel Macron, which unions say will force millions of people to work longer or face curtailed benefits. Thousands of people marched in several cities ahead of two major demonstrations […]