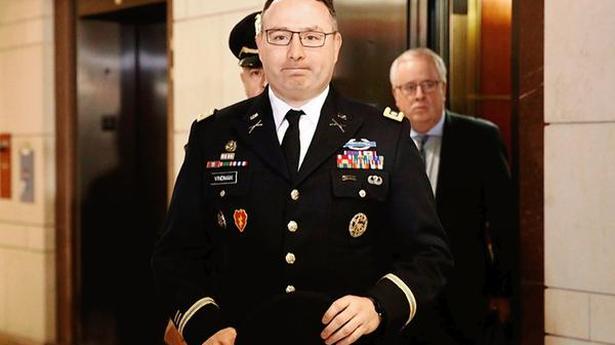 House Democrats unveiled plans on Tuesday to open up the impeachment inquiry into President Donald Trump with public hearings, after criticism from Republicans that the process has been overly secretive.

The White House responded that it still considers the proceedings a “scam,” signalling no let-up in Mr. Trump’s strategy of trying to prevent the investigation from going ahead.

Democrats deny that they have been secretive, arguing that five weeks of closed hearings — in which Republican lawmakers participated — were necessary for evidence-gathering, ahead of the public portion of the inquiry into the accusation that Mr. Trump pressured Ukraine to investigate a political rival.

On Tuesday, Democrats proposed legislation for the next stages of the process, giving Republicans the right to call their own witnesses and subpoena records.

The House Intelligence Committee will then govern the process of firming up evidence from testimony and documents, with both sides equally able to question witnesses in a public setting.

The third stage will see the evidence against Mr. Trump forwarded to the Judiciary Committee to draw up articles of impeachment, which would be voted on by the entire House.

The rules give Mr. Trump and his lawyers their first opportunity to take a direct role and argue their case before the Judiciary Committee, calling for more testimony or evidence and cross-examining witnesses, the House Rules Committee said. However, it added, if the White House rejects subpoenas for testimony and documents from the probe — as it has done so far — it could be denied some of the promised role in the hearings. That clash does look set to continue.

The “Democrats’ impeachment has been an illegitimate sham from the start as it lacked any proper authorisation by a House vote,” Mr. Trump’s spokeswoman Stephanie Grisham said in a statement after the Democrats’ plans were announced.

The revamped procedures do “nothing to change the fundamental fact that House Democrats refuse to provide basic due process rights,” she said.

The new rules are slated to be voted on by the Democratic-majority House on Thursday.

“The House impeachment inquiry has collected extensive evidence and testimony, and soon the American people will hear from witnesses in an open setting,” senior House Democrats said in a statement.

The impeachment plan was released as a senior White House official presented damning testimony against Mr. Trump in Congress on Tuesday.

Two billionaire Democratic presidential hopefuls, Michael Bloomberg and Tom Steyer, collectively spent about $389 million last year on their campaigns, more than the rest of the remaining Democratic field combined, according to disclosures filed on Friday. Mr. Bloomberg launched his campaign in November and spent more than $188 million in two months, a sum sourced […]

Pakistan’s spy agency, the Inter Services Intelligence agency, provided the U.S. with a lead that helped them find and kill al-Qaeda leader Osama bin Laden, Prime Minister Imran Khan said on Monday. This is a significant revelation as Islamabad had so far denied having any knowledge of the dreaded al-Qaeda chief in the country until […]

Uber Technologies Inc co-founder and former chief executive Travis Kalanick has sold nearly 21% of his stake in the ride-hailing company following the expiry of a so-called lockup period, a regulatory filing from late Friday (November 8) showed. Mr. Kalanick sold more than 20 million shares, worth nearly $547 million, according to the filing. He […]