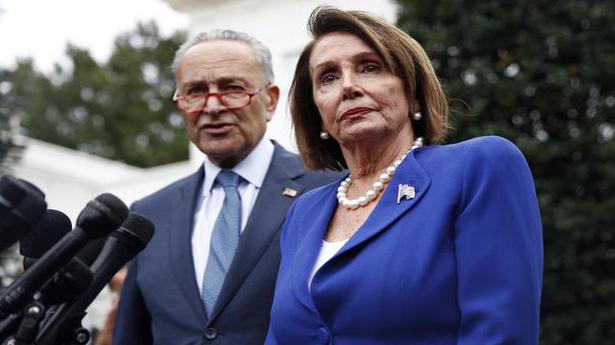 Congressional Democrats walked out of a White House meeting on the Syria issue on Wednesday, claiming President Donald Trump insulted Speaker Nancy Pelosi by calling her a “third-rate politician”.

The White House had invited the leadership and top committee members of both Democrats and Republicans, and the Congress to brief them about their policy on Syria.

The Democrat-controlled U.S. House of Representatives has passed a resolution rebuking Mr. Trump’s decision to pull out troops from northern Syria, a move that paved the way for Turkey to launch cross-border military operations against Kurdish forces, who were a key ally of the U.S. in the fight against the Islamic State.

He also said President Trump told him that the Turks and the Syrians will guard the IS prisoners. “The President has no real plans for containing the IS,” Mr. Schumer said.

The Democrats said they had walked out of the meeting because of the insults against Ms. Pelosi.

Earlier the House of Representative passed a bicameral, bipartisan resolution opposing Mr. Trump’s decision in Syria. It was passed by a vote of 354 to 60.

The President unleashed an escalation of chaos and insecurity in Syria when he gave Turkey the green light to attack our Kurdish partners — threatening lives, risking regional security and undermining America’s credibility as a trustworthy ally, Ms. Pelosi said.

Together, the Congress calls on Mr. Trump to support Kurdish communities, to work to ensure that the Turkish military acts with restraint and to present a clear strategy to defeat IS, she said.

There is no strategy right now from the White House for IS, Syria or the region. The House will continue to take action to honour the sacrifice of our military and our allies, and to restore sanity and strength to our national security, Ms. Pelosi said.

A roadside bomb in Afghanistan on Wednesday killed at least 35 people travelling on a bus, including children, and injured 27, officials said. Security has been deteriorating across Afghanistan this year, with the Taliban and the Islamic State fighters mounting attacks on Afghan forces, government employees and civilians. The blast on the main road linking […]