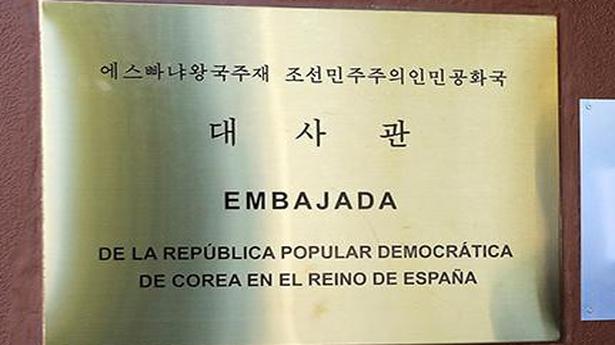 A shadowy dissident group dedicated to overthrowing Kim Jong-un was behind a raid on Madrid’s North Korean Embassy last month, The Washington Post has reported, offering the latest explanation for the mysterious event.

Ten men burst into the diplomatic mission on February 22, roughing up employees before making off with documents and computers in two Embassy vehicles they later abandoned, just days before a high-stakes nuclear summit between Mr. Kim and U.S. President Donald Trump.

The Post reported on Friday that the operation was carried out by a group called the “Cheollima Civil Defense” (CCD), a secretive organisation committed to overthrowing the Kim dynasty.

The CCD first emerged in 2017 when it posted an online video of Mr. Kim’s nephew, saying it had guaranteed his safety after his father, Mr. Kim’s half-brother, was killed after being smeared with nerve agent in Kuala Lumpur airport in February that year.

France on Tuesday reported its highest daily number of deaths from COVID-19 since the coronavirus epidemic began, saying 499 more people had died in hospital to bring the toll to 3,523. Also read | 12-year-old dies from COVID-19 in Belgium There are now 22,757 people hospitalised in France with the disease, with 5,565 of them […]

At least four schoolchildren and one adult were shot dead when security forces broke up a student protest in the Sudanese city of El-Obeid on Monday, campaigners said. Gunfire rang out as teenagers rallied against fuel and bread shortages in the capital of North Kordofan State, residents said, at a time of heightened tension between […]