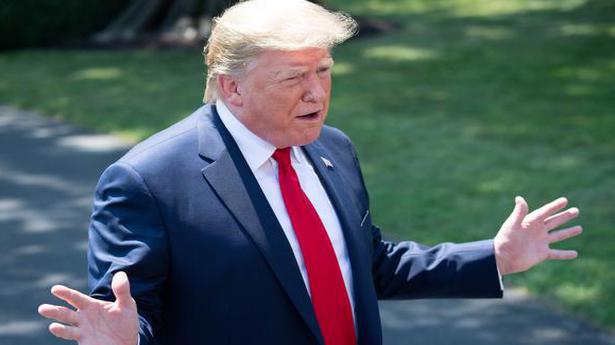 President Donald Trump on Tuesday denied any racist “strategy” behind a string of verbal attacks on African-Americans, but found himself being accused of hate by a heckler at a high-profile speech.

“I have no strategy. I have zero strategy,” Mr. Trump told reporters at the White House, when asked about his recent tirades against black and other non-white opponents, as well as the majority black city of Baltimore. “I’m not angry at anybody,” he said.

Earlier, Mr. Trump denounced the “horrors” of slavery in a speech in Jamestown, celebrating the founding of the first local legislature there by English colonists 400 years ago.

In his speech, Mr. Trump noted that along with the first settlers came the first African slaves, making Jamestown a symbol not just of U.S. democracy but of mass slavery.

“We remember every sacred soul who suffered the horrors of slavery,” Mr. Trump said, calling this the “barbaric trade in human lives.”

But black Virginia State lawmakers boycotted the event, saying it had been “tarnished” by Mr. Trump.

“It is impossible to ignore the emblem of hate and disdain that the president represents,” the African-American lawmakers said in a statement, accusing Trump of using “racist and xenophobic rhetoric.”

In a rare interruption of a presidential speech, a Virginia state lawmaker heckled Mr. Trump and held up a sign reading “Deport hate” and “Go back to your corrupted home.”

Mr. Trump paused his speech while the man was led away but did not say anything.

The president has shown little of that restraint over the last two weeks, with a barrage of racially loaded insults.

That pattern has prompted an outpouring of criticism that Mr. Trump is deliberately deepening racial divisions in a pitch to his white, working-class base ahead of his 2020 reelection bid.

At the White House, he told reporters, “I am the least racist person anywhere in the world.”

But he then claimed that Sharpton is a racist and he continued to lash out at Baltimore, suggesting on Tuesday that violent crime there is worse than in Honduras, a country with one of the world’s highest homicide rates outside a war zone.

“Baltimore happens to be about the worst case,” Trump said in an interview with The Washington Post.

According to FBI data from 2017, the latest full-year figures available, Baltimore had a per capita murder rate of 55.8 per 100,000 population, which was less than that of St Louis, Missouri.

Honduras registered 41.2 homicides per 100,000 inhabitants in 2018, with one of its cities, San Pedro Sula, recording a murder rate of more than 80 per 100,000, according to a report last November by the Inter-American Development Bank (IDB).

Facebook says it has removed a Conservative Party advertisement that used BBC news footage on the grounds that it infringed on Intellectual Property Rights. The BBC had complained about the ad last week, arguing material involving some of its well-known presenters was taken out of context and could damage its impartiality. Facebook said on Monday […]

Hong Kong’s opposition Democratic Party is investigating attacks by suspected triad gangsters on train passengers on Sunday, after a night of violence opened new fronts in the political crisis now deepening across city. Screams rang out when men, clad in white t-shirts and some armed with poles, flooded into the rural Yuen Long station and […]