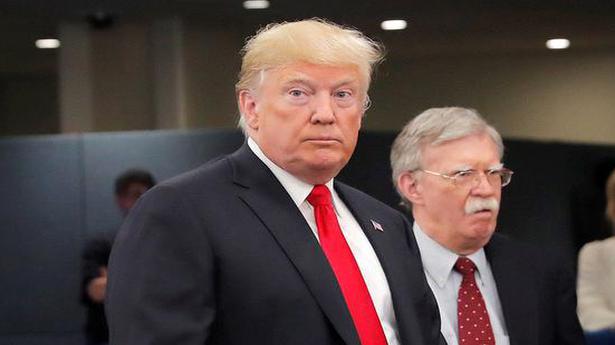 President Donald Trump on Monday denied that he told his former National Security Advisor John Bolton that military aid to Ukraine was tied to Kiev investigating his political rivals.

Mr. Trump’s tweets came after The New York Times reported on Sunday that Mr. Bolton alleges as much in a draft of his upcoming book.

“I NEVER told John Bolton that the aid to Ukraine was tied to investigations into Democrats, including the Bidens. In fact, he never complained about this at the time of his very public termination,” Mr. Trump tweeted on Monday. “If John Bolton said this, it was only to sell a book.”

Mr. Trump was impeached last month for abuse of power and obstruction of Congress.

House of Representatives prosecutors have spent three days laying out a detailed case that Mr. Trump withheld military aid and a White House meeting to pressure his Ukrainian counterpart to open investigation into Mr. Biden and the former Vice-President’s son Hunter, who served on the board of a Ukrainian gas firm.

Democrats quickly seized on the report to press demands that Mr. Bolton and other key officials be called testify in Trump’s impeachment trial.

A key point of Mr. Trump’s impeachment defence has been that there was no quid-pro-quo. Mr. Trump’s team has maintained that the holdup in aid was separate from his requests for an investigation into the Bidens. Mr. Bolton’s reported assertion in the manuscript would undercut this.

Britain’s longest-serving Indian-origin Member of Parliament has demanded the withdrawal of an emergency resolution passed by the party on Kashmir. Keith Vaz, the Labour MP for Leicester East, has criticised the motion on ‘internationalising Kashmir,’ passed in the Labour Party conference in Brighton on September 25. Calling the resolution “divisive”, Keith Vaz has written to […]

For an economy that has been starved of good news for a while, the improvement in India’s ranking and score in the World Bank’s Ease of Doing business indicator should bring some cheer. India placed 63rd out of 190 countries — an improvement of 14 places from its 77th position last year. The country’s score […]