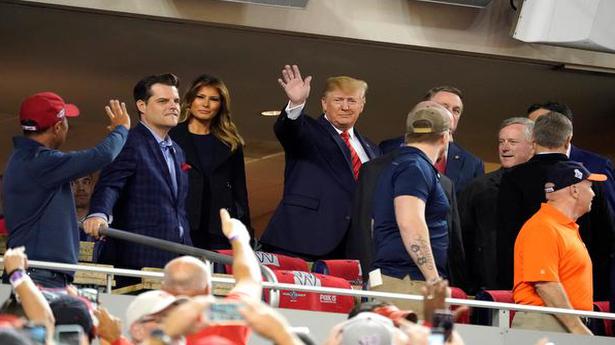 U.S. President Donald Trump was greeted with boos and a smattering of chants of “Lock him up!” when he appeared on screen at the World Series in Washington on Sunday, even as he celebrated one of the biggest wins of his administration.

The President, along with First Lady Melania Trump and several lawmakers, appeared live on the screen as part of a video package thanking U.S. troops for their service.

The hometown crowd cheered fans and soldiers displayed earlier on the screen, but there were boos and isolated “Lock him up” champs when Mr. Trump appeared, according to a Reuters reporter in attendance and videos posted on Twitter.

The frosty reception came on a day when Mr. Trump had announced the death of Abu Bakr al-Baghdadi, the leader of the Islamic State group, in a raid by U.S. special forces in northwest Syria.

Mr. Trump won just 4% of the vote in the District of Columbia in the 2016 presidential election. The U.S. capital is hosting its first World Series since 1933.

Mr. Trump did not throw out the ceremonial first pitch at the game, as many previous presidents have done. That task fell instead to celebrity chef Jose Andres, who founded a non-profit group to feed disaster victims around the world.

Mr. Andres also canceled plans to run a restaurant in Mr. Trump’s Washington hotel because of Mr. Trump’s disparaging comments about Mexicans, which led to a legal settlement.

US Vice President Mike Pence visited an overcrowded migrant camp in Texas on Friday, coming face to face with detainees held in horrific conditions and deploring an immigration crisis that he said was “overwhelming our system.” Pence travelled to the Mexico border as protesters rallied in several US cities urging the government to shut down […]

The Taliban attacked a second Afghan city in as many days on Sunday and killed several members of security forces, officials said, even as Washington’s peace envoy said the U.S. and the militant group are “at the threshold of an agreement” to end America’s longest war. The attack on the capital of Baghlan province came […]

A magnitude 6.4 earthquake struck the southern Philippines on October 16, killing at least one child and injuring more than two dozen other people. Government authorities were starting to receive reports from field officials on the island of Mindanao where the earthquake struck, opening cracks in buildings and homes, sending residents running from shops and […]