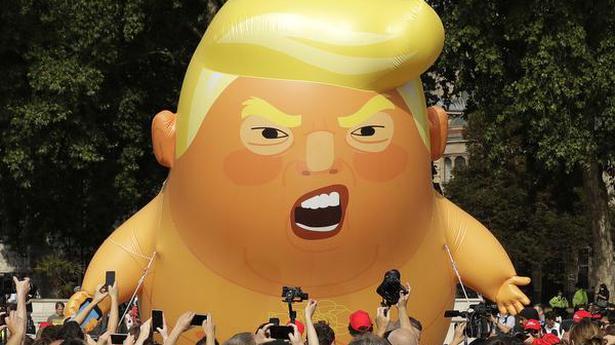 U.S. President Donald Trump waded once again into Britain’s Brexit debate on June 2 on the eve of a state visit to London, urging Theresa May’s successor to leave the EU with no deal.

Whoever takes over as Britain’s next Prime Minister should not be afraid to “walk away” from negotiations with Brussels and should refuse to pay the agreed divorce bill, he told the Sunday Times newspaper.

The intervention comes after Mr. Trump used another newspaper interview to declare that former Foreign Secretary Boris Johnson would be an “excellent” replacement for Ms. May.

Britain is rolling out the red carpet for the President this week, starting with a private lunch with Queen Elizabeth II and a state banquet at Buckingham Palace on June 3.

But large protests are also planned over what London Mayor Sadiq Khan described as Mr. Trump’s “divisive behaviour”, while Opposition politicians are boycotting the banquet.

Mr. Trump embarrassed Ms. May with outspoken remarks on Brexit during his visit to Britain in 2018. On June 2, he again urged the next government to follow his own negotiating rule book.

Ms. May has already agreed to pay £39 billion (€45 billion, $50 billion) to cover Britain’s liabilities as it moves to sever four decades of EU membership.

But Mr. Trump said: “If I were them I wouldn’t pay $50 billion. That is me. I would not pay, that is a tremendous number.”

Ms. May agreed a divorce agreement with Brussels in November 2018, but British MPs have rejected it three times and she has had to delay Brexit twice.

She has now been forced out and her Conservative party is beginning the process of finding a new leader, with 13 candidates already declared. Mr. Johnson, one of the frontrunners, is among several to say Britain should leave the EU on October 31 with or without a deal.

They are under pressure from the Brexit party, the latest political vehicle of anti-EU populist leader Nigel Farage, which came top in European Parliament elections last month. Mr. Trump said he believed Mr. Farage should play a role in negotiating Brexit with the European Union, saying he had a “lot to offer”.

Three years after Britons voted by 52% to 48% to leave the EU in 2016, the government and lawmakers are still wrangling over the issue.

Brexit day was originally set for March 29. But Ms. May delayed it twice to avoid a damaging “no deal” exit, under which Britain would separate from its closest trading partner with no new arrangements in place.

Her own Conservative MPs had blocked the deal because they feared it would leave Britain too closely tied to the EU.

Many candidates to replace her want to renegotiate the text on EU withdrawal, although the EU has explicitly ruled that out. If they cannot, several say Britain must leave anyway.

However, one frontrunner, Environment Secretary Michael Gove, was reported on June 2 to be ready to delay Brexit again to avoid a “no deal” scenario.

Meanwhile voters across the country are divided.

Although Mr. Farage won the most votes in European elections, the Liberal Democrats, who want a new referendum to reverse Brexit, came second.

Britain’s future trading relationship with the United States will be crucial to its post-Brexit success and likely discussed during Mr. Trump’s talks with Ms. May at Downing Street this week.

But some here fear Britain would be steamrolled by the far bigger U.S. into accepting an unbalanced accord, especially given Mr. Trump’s “America First” stance in shaking up trade ties with Mexico, Canada, Japan and China.

U.S. Ambassador to Britain Woody Johnson told BBC television that Washington was already preparing the way for a trade deal and it would be done “as expeditiously as any agreement we’ve ever had”. He said he would expect Britain to be open to US agricultural products, and when asked about access of US firms to Britain’s cherished state-run health service, said “all things that are traded would be on the table”.

Despite Iran’s hope, Britain yet to release oil tanker

The British territory of Gibraltar is yet to release an Iranian oil tanker seized by Royal Marines in the Mediterranean despite an Iranian report that it could do so on Tuesday, an official Gibraltar source said. The commandeering of the Grace 1 on July 4 exacerbated frictions between Tehran and the West and led to […]

For years, Sri Lanka’s Muslim community warned authorities about a firebrand cleric. Now it seems Zahran Hashim may have played a key role in one of the worst attacks in the country’s history. A video released by the Islamic State group after it claimed responsibility for bombs that killed 359 people, appears to prominently feature […]