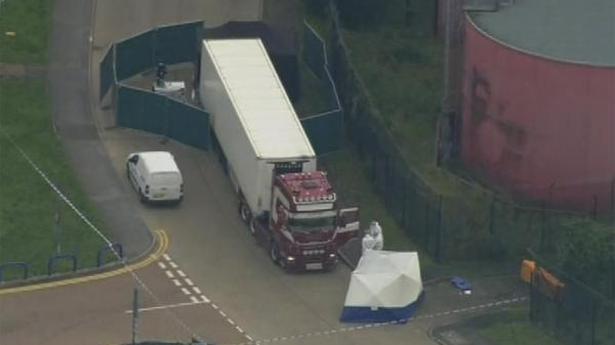 British police investigating the deaths of 39 people in a refrigerated truck said on Saturday they had charged a driver arrested at the scene with manslaughter and people trafficking.

Robinson was arrested shortly after the bodies were discovered in the truck at Purfleet on the River Thames estuary, after arriving on a ferry from the Belgian port of Zeebrugge early on Wednesday.

He will appear in court on Monday, Essex police said.

Three other people have been arrested in Britain in connection with the investigation, on suspicion of conspiracy to traffic people and manslaughter. They remain in custody.

They include a 38-year-old man and a 38-year-old woman from Warrington in northwest England, reportedly a couple. She is said to be the legal owner of the truck.

A 48-year-old man from Northern Ireland is also being held.

On Saturday, Irish police announced another arrest at Dublin port, of a man in his early 20s from Northern Ireland.

Coronavirus outbreak: China toll rises to 41, 11 under watch in hospitals in Kerala, Mumbai and Hyderabad

The death toll due to the new coronavirus outbreak mounted to 41 in China, a news agency quoted the Chinese government as saying on early Saturday. The deadly virus spread has now infected more than 1,000 people globally, highlighting the challenges for health authorities around the world working to prevent a global pandemic. The Health […]