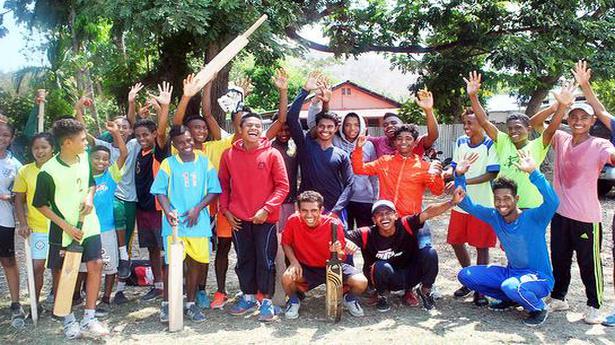 Navigating pigs and goats as they practise on a dusty paddock, a group of young East Timorese are hoping to copy the fairy-tale rise of Afghanistan by making it as Asia’s latest emerging cricket nation.

In the impoverished, once war-ravaged country, which only gained independence from Indonesia in 2002, the manicured pitches of Lord’s are a world away for aspiring cricketer Juvelino Mique “Micky” Rama Pinto, 16, who lists Virat Kohli and Brett Lee among his heroes.

His batting partner, Joana Gonsalves Borges, 14, has seen cricket on TV and is excited by “watching big sixes and wickets being taken”. Like Micky, she wants to play for East Timor.

The vision to turn soccer-obsessed East Timor on to cricket originated with Mark Young, who played at league level in Lancashire and Gloucestershire before emigrating to New Zealand in 1997.

Mr. Young and a Pakistani colleague, Muhammad Tayyeb Javed, argue that East Timor can use cricket as part of its revival just like Afghanistan, whose players learned the game in refugee camps but have risen to the elite Test level.

Management consultant Young and his partner, Lara, came to East Timor hoping to help the country after first working in India, where he said “the poverty there left a big impression on us”.

Through the Volunteer Service Abroad (VSA) aid agency, Mr. Young was placed in East Timor as an advisor to a government organisation tasked with diversifying the economy.

Walking to work one morning in Dili, Mr. Young noticed a group of youngsters playing cricket with homemade bats and stumps. They had been taught the basics by Mr. Tayyeb.

A national body — Federacao de Criquete East Timor — has been established with a strategic plan that talks of “young Timorese people using cricket to grow and fulfil their potential”. Afghanistan is mentioned as an example.

PIA said it would temporarily discontinue all its flights to Europe but later said it received a two-day relief. Source: thehindu.com Related

Coronavirus | Another flight to evacuate Indians from Wuhan to leave Delhi on Saturday: AI

Air India said another special flight to evacuate Indians from coronavirus-hit Wuhan in China would depart from the Delhi airport on Saturday afternoon, hours after the first flight with 324 passengers landed in the Indian capital . Wuhan is the epicentre of novel coronavirus outbreak, which has killed more than 200 persons in China itself. […]