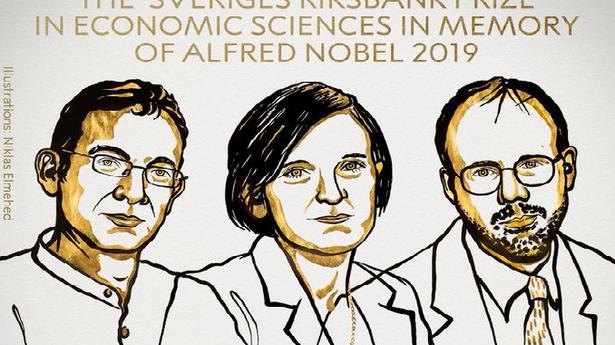 The Royal Swedish Academy of Sciences has decided to award the 2019 Sveriges Riksbank Prize in Economic Sciences in Memory of Alfred Nobel, popularly called the Nobel Prize in Economics, to Abhijit Banerjee, Esther Duflo, and Michael Kremer “for their experimental approach to alleviating global poverty”.

While Dr. Banerjee and Dr. Duflo are both affiliated with the Massachusetts Institute of Technology, Dr. Kremer is with Harvard University. The three will equally share the prize money of 9 million Swedish krona (about $916,798 and ₹6.53 crore).

“The research conducted by this year’s laureates has considerably improved our ability to fight global poverty,” the Royal Swedish Academy of Sciences said in a release. “In just two decades, their new experiment-based approach has transformed development economics, which is now a flourishing field of research.”

The laureates have, since the mid-1990s, sought to introduce a new approach to obtaining reliable answers about the most effective ways to combat global poverty. Rather than focussing on big-picture questions, they divided the issue into smaller, more manageable and measurable questions.

They then showed that these smaller questions could be best answered through carefully designed experiments among the people who are most affected. This thought process has resulted in what are called randomised control trials, previously used in the pure sciences and in clinical drug trials, to be deployed in the social sciences.

“As a result, we now have a large number of concrete results on specific mechanisms behind poverty and specific interventions to alleviate it,” said the technical paper, accompanying the announcement. “For example, on schooling, strong evidence now shows that the employment of contract teachers is generally a cost-effective way to improve student learning, while the impact of reduced class size is mixed, at best.”

“On health, poor people’s investment in preventive care has been shown to be very sensitive to the prices of health products or services, giving a strong argument for generous subsidies to such investments,” the paper added. “On credit, growing evidence indicates that micro-finance programmes do not have the development effects that many had thought when these programmes were introduced on a large scale.”

Dr. Banerjee and Dr. Duflo, who are incidentally married to each other, have had a long history of conducting research together, often collaborating with Dr. Kremer as well.

One of the major findings by Dr. Banerjee and Dr. Duflo was that, in developing countries, there is often a stark difference between the technology and practices used by companies within the same economy and sector. That is, in developing economies, some companies use the latest technology and practices, while others in the same country and sector use outdated production methods. This within-sector differences are less stark in developed economies, they found.

“Banerjee and Duflo further argued that these misallocations can be traced back to various market imperfections and government failures,” the paper said. “Hence, a core step in understanding, and ultimately alleviating, poverty is to identify sources of the observed inefficiencies as well as policies that could address them.”

Dr. Banerjee was born in 1961 in Mumbai, India. He completed his Ph.D in 1988 at Harvard University, having previously studied at the Jawaharlal Nehru University, New Delhi, and Presidency College, which was then affiliated with the University of Calcutta. He is currently the Ford Foundation International Professor of Economics at the Massachusetts Institute of Technology (MIT).

He described Prime Minister Narendra Modi as a very good friend of him Source: thehindu.com Related

South Korea coast guard says 12 people are missing from a fishing boat that caught fire in waters near the southern island of Jeju. Jeju coast guard official Lee Geun-han said on Tuesday the coast guard and navy were deploying vessels, helicopters and a patrol plane to search the area for survivors. Mr. Lee says […]