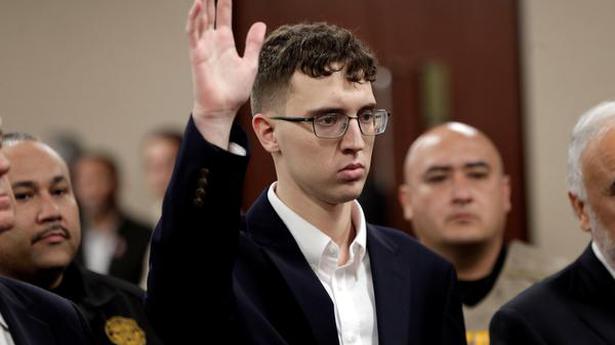 The Texas man accused of deliberately targeting Mexicans in a shooting spree that killed 22 people at an El Paso Walmart store pleaded not guilty on Thursday in his first court appearance.

Patrick Crusius, 21, was indicted last month for capital murder and will face the death penalty if he is convicted, the El Paso County District Attorney Jaime Esparza said.

Another 26 people were wounded during the shooting.

Crusius strolled into the courtroom trailing his two lawyers. Dressed in a navy sports jacket, white shirt and gray slacks, he betrayed no emotion and only spoke twice, answering ”yes, your honor” to Judge Sam Medrano when asked if his name was correct on the indictment, and “not guilty” when asked for his plea. He was in and out of the courtroom in about three minutes.

Security had been beefed up in and around the courthouse. Sheriff’s deputies set up metal detectors and X-ray machines to screen everyone entering the building. The courtroom seating 100 was packed.

“It’s our intention to try the case in the courtroom and not in the media,” defense attorney Mark Stevens said after the arraignment, adding that he did not want to make the pain worse for victims’ family members.

Another defense attorney, Joe Spencer, added that “Mr. Stevens and I are morally opposed to the death penalty” and that the pair would work hard to spare the alleged shooter that fate.

The Texas killings were followed just 13 hours later by a mass shooting in Dayton, Ohio, where a gunman wearing body armor and a mask killed nine people and wounded 27 others before he was shot dead by police.

Both floated the idea of requiring universal background checks on people seeking to buy guns and talked about “red flag” laws that would allow people to petition a court to have an individual’s guns taken away. Even so, no concrete legislative action has yet taken place in Texas.

Crusius is accused of driving 11 hours to El Paso from his hometown of Allen, near Dallas, on August 3 and firing at shoppers with an AK-47 rifle inside the Walmart store. He surrendered to officers who confronted him outside.

Crusius confessed while surrendering and told police he was targeting Mexicans, according to an El Paso police affidavit released days after the shooting. Most of those killed were Latinos.

A four-page statement believed to have been written by the suspect and posted on 8chan, an online message board often used by extremists, called the Walmart attack “a response to the Hispanic invasion of Texas.”

Pro-democracy protesters Wednesday stepped up a “blossom everywhere” campaign of road blocks and vandalism across Hong Kong that has crippled the international financial hub this week and ignited some of the worst violence in five months of unrest. The new phase in the crisis, which has forced schools and shopping malls to close as well […]

Game for the Games, with tempered buzz

With just less than a year to go for the 2020 Tokyo Olympic Games, the buzz in the city is relatively tempered. Unlike Beijing 2008, or indeed the last time Tokyo hosted the Games in 1964, next year’s Olympics are less a débutante’s ball with all its attendant glamour and tremulousness than an elegant dowager’s […]