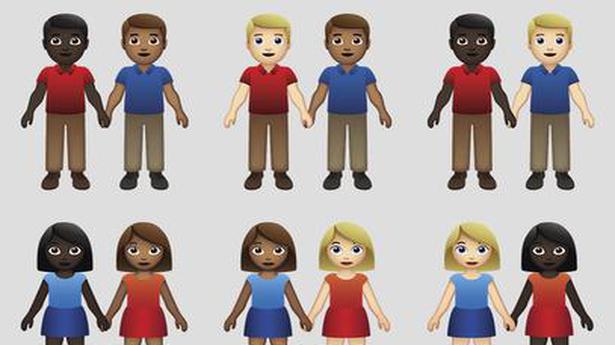 While such impediments to marriage were dismantled over time, there are still hurdles, however small, to overcome. Here, in 2019, interracial couples have a small victory to celebrate — the approval of 71 new variations of emoji for couples of colour.

Capping a yearlong project by, of all people, the folks at the swipe-right dating app Tinder and tech activist group Emojination, the emoji gods (known as the Unicode Consortium), recently approved the additions in characters technically referred to as people “holding hands.” A new “gender-inclusive” couple emoji was also approved among 230 new characters.

Until now, emoji of two or more people on various platforms and devices have been available only in the default yellow. While the Unicode Consortium, where Google, Microsoft and Apple have voting seats and Lee is vice-chair of the emoji subcommittee, signed off on the skin-tone additions, user companies will decide for themselves starting later this year whether to add them and how they will look.

Jenny Campbell, the chief marketing officer for Tinder, isn’t worried about distribution after the company mounted a campaign and petition drive in support of the technical proposal it submitted to Unicode.

“Ultimately, we wanted to get the interracial emoji couple on people’s keyboards not only for equality, but also to spread acceptance for all couples no matter what their race,” she told on Thursday. “Our users are craving a way to express themselves visually and see themselves reflected in our everyday tech language.”

So are lots of other emoji enthusiasts of colour left in the wings for years. More than 50,000 people signed Tinder’s online petition at Change.org. “Unicode is taking user demand for more skin tones across emoji seriously,” said Mr. Lee, the co-founder of the grassroots Emojination. “The additional of skin tones, gender variations, hijab and hair styles are part of users demanding to see themselves represented on the emoji keyboard. Diverse couples and families are part of that.”

While facial features and hair textures are yet to be determined by some vendors, Tinder said the use of six existing skin tones already available for one-person emoji and various others is a step in the right direction. The lack of colour options in couples, the company said, felt like a slight.

Also approved this year- A waffle, a white heart and a guide dog.

The online shopping festival offers a lifeline to brands in a pandemic year Source: thehindu.com Related

Iran’s supreme leader Ayatollah Ali Khamenei on Wednesday called the end of oil sanction waivers by the United States a “hostile measure” that “won’t be left without a response“. “U.S. efforts to boycott the sale of Iran’s oil won’t get them anywhere. We will export our oil as much as we need and we intend,” […]

Maryam Nawaz, the daughter of jailed former Pakistan premier Nawaz Sharif, has been admitted to the same hospital where her father is undergoing treatment for low platelet count, according to media reports on Thursday. The health condition of Mr. Sharif, 69, who was admitted to the Services Hospital in Lahore on Monday from the Kot […]