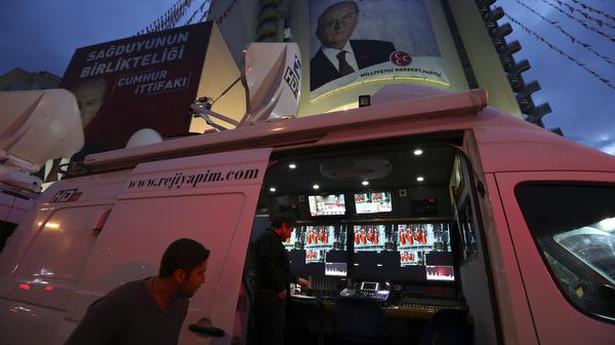 President Recep Tayyip Erdogan’s ruling party is leading in Sunday’s municipal elections that he has depicted as a fight for Turkey’s survival, but may lose control of the capital in the vote that is seen as a test of his support amid a sharp economic downturn.

Mr. Erdogan’s conservative, Islamic-based party gained 46% of the votes in the elections with more than half of the more than 1,94,000 ballot boxes counted, according to state broadcaster TRT. The main, secular-oriented opposition party has 30.5%.

The voting was marred by scattered election violence that killed at least four people and injured dozens of others across Turkey. Unofficial final results were expected late on March 31.

Economic prosperity provided Mr. Erdogan and his party with previous election victories. But the party faces the risk of losing mayoral seats in the elections taking place in 30 large cities, 51 provincial capitals and hundreds of districts as Turkey grapples with a weakened currency, a double-digit inflation rate and soaring food prices.

The high stakes of the local contests were brought into stark display with the deaths of two members of the Islamic-oriented Felicity Party, a small rival of the president’s Justice and Development Party. Felicity’s leader, Temel Karamollaoglu, alleged a polling station volunteer and a party observer were shot by a relative of a ruling party candidate.

The killings weren’t caused by “simple animosity,” but happened when the volunteers tried to enforce the law requiring ballots to be marked in private voting booths instead of out in the open, Mr. Karamollaoglu tweeted.

Speaking to reporters after he voted, Mr. Erdogan said he was sad about the deaths and didn’t want them to become a cause for “a questioning or a judgment between political parties.” Two other people were killed in fighting in the southern city of Gaziantep.

The exact causes of the fights remained unclear. Election campaigning was highly polarised, with Mr. Erdogan and other officials using hostile rhetoric toward opposition candidates.

Sunday’s elections were a first test for Mr. Erdogan since he won re-election under a new system of government that gave the presidency expanded powers.

Mr. Erdogan’s ruling party has renewed an alliance with the country’s nationalist party to increase votes. Opposition parties also coordinated strategies and put forward candidates under alliances in an effort to maximize the chances of unseating members of the Justice and Development Party, known in Turkish by the acronym AKP.

Ankara was considered the main battleground of the race and opinion polls suggested the candidate of the opposition alliance, Mansur Yavas, could end the 25-year rule of AKP and its predecessor.

A former government environment minister, Mehmet Ozhaseki, ran for mayor under the banner of Mr. Erdogan and his nationalist allies. The ruling party accused his opponent Mr. Yavas of forgery and tax evasion. Mr. Yavas says he is the victim of a smear campaign.

Another closely watched mayoral election is in Istanbul, Turkey’s largest city. Mr. Erdogan began his rise to power as its mayor in 1994 and said at campaign rallies that “whoever wins Istanbul, wins Turkey.”

Before the elections, Mr. Erdogan campaigned tirelessly for AKP’s candidates, framing the municipal elections taking place across Turkey as matters of “national survival.” He also portrayed the country’s economic woes as attacks by enemies at home and abroad.

Gonul Ay, 38, said she voted for the ruling party and Yildirim in Istanbul because of his experience.

“I voted for the AKP for continuity and so that their services continue,” the homemaker said. “God willing, this crisis and chaos will be fixed and we’ll see healthier, happier days.”

“All elections have turned into a race against the one-man regime, and people we call the opposition is trying to carve out some breathing space,” Mr. Duzgun said.

Since 2016, Mr. Erdogan’s government has replaced elected mayors from the pro-Kurdish party in nearly 100 municipalities, installing in their place government-appointed trustees and alleging the ousted officials had links to outlawed Kurdish militants.

The pro-Kurdish party is seeking to win back the offices. However, it strategically sat out critical mayoral races in major cities, including Istanbul and Ankara, with the aim of sending votes to a rival secular opposition party to help challenge Mr. Erdogan’s party.

Since the previous local elections in 2014, Turkish citizens have gone to the polls in five different elections. In last year’s presidential and parliamentary elections, Mr. Erdogan garnered 52.6% of the votes and his party and its nationalist ally won 53.7% of the parliamentary vote.

The Australian man accused of killing 50 Muslim worshippers in the Christchurch terror attack will face 50 murder charges and 39 attempted murder charges, New Zealand police said on Thursday. “Other charges are still under consideration,” the police said in a statement. Australian Brenton Tarrant, 28, a white supremacist, was previously charged with only one […]

Scuffles broke out in Hong Kong’s legislature on Saturday between pro-democracy lawmakers and those loyal to Beijing over an extradition law that will extend Beijing’s powers over the financial hub. One person was taken to hospital. The former British colony is trying to enact rules that would allow people accused of a crime, including foreigners, […]

U.S. President Donald Trump’s handling of the coronavirus (COVID-19) pandemic crisis and his rude remarks at reporters questioning his contempt for science and disdain for experts have grabbed headlines in the American media, with a leading newspaper even going to the extent of terming him as the worst President in U.S. history. According to a […]