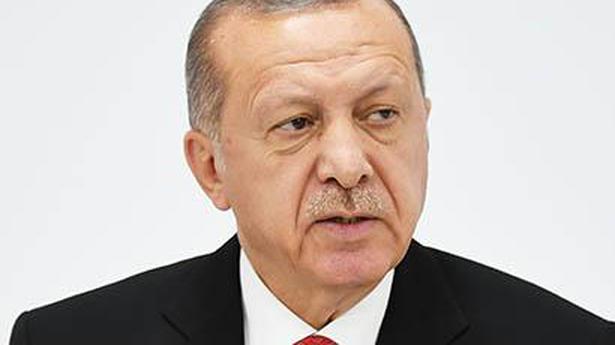 Turkish President Recep Tayyip Erdogan dismissed a U.S. proposal to broker a ceasefire in northern Syria and said he was not worried over U.S. sanctions, in comments published in Turkish media on Wednesday.

He also said the Syrian Army’s entry into the flashpoint northern Syrian city of Manbij was not a “very negative” development for his country as long as the region is cleared of Syrian Kurdish fighters.

U.S. Vice-President Mike Pence and Secretary of State Mike Pompeo will travel on Wednesday to Ankara to press Turkey to halt its offensive against Syrian Kurdish fighters, President Donald Trump said on Tuesday.

Mr. Pence’s office released a separate statement adding that he would “voice the United States’ commitment to reach an immediate ceasefire and the conditions for a negotiated settlement.”

“It is not possible for us to declare a ceasefire” until Turkey clears the “terror organisation” from its border, Mr. Erdogan said, referring to the Kurdish forces.

Mr. Pence is due to meet Mr. Erdogan on Thursday, the U.S. statement added, to reiterate Mr. Trump’s commitment to impose “punishing economic sanctions” on Turkey until a resolution is reached.

“They are pressuring us to halt the operation. We have a clear target. We are not worried about the sanctions,” Mr. Erdogan said.

The Turkish leader also said the Syrian army taking control of Manbij was not a big problem for Ankara.

“The regime’s entry into Manbij is not a very, very negative (development) to me. Why? Because it is their own land,” he said, adding that what mattered for Turkey was the removal of Kurdish militants.

Mr. Erdogan told Russian President Vladimir Putin in a phone call late on Tuesday that Turkey’s operation would contribute to the protection of Syria’s territorial integrity as well as efforts to fight terror, according to the Turkish presidency.

I know nothing about Assange: Trump

President Donald Trump declared that “I know nothing about WikiLeaks” after its founder Julian Assange was hauled out of the Ecuadorian Embassy in London to face charges, a stark contrast to how candidate Trump showered praise on Mr. Assange’s organisation night after night during the final weeks of the 2016 presidential campaign. Asked about Thursday’s […]

Since 2000, child labour decreased by 94 million but this gain could soon be reversed, they warn Source: thehindu.com Related