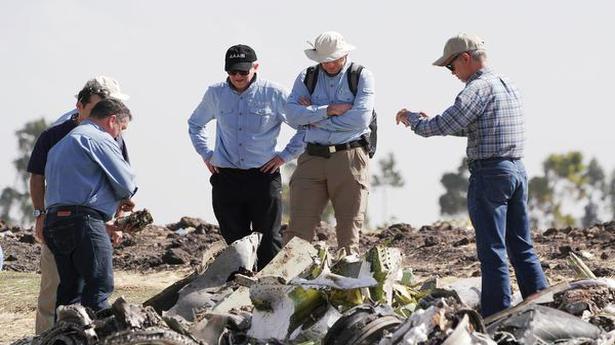 The pilot of the Ethiopian Airlines plane that crashed requested permission “in a panicky voice” to return to the airport shortly after takeoff, The New York Times reported on Friday.

The report cited “a person who reviewed air traffic communications” from Sunday’s flight saying controllers noticed the plane was moving up and down by hundreds of feet, with its speed appearing unusually fast.

An airline spokesman has said the pilot was given permission to return. But the plane crashed minutes later outside Addis Ababa, killing all 157 on board.

French authorities now have the plane’s flight data and voice recorders for analysis. The agency in charge of the review said it was unclear whether the data could be retrieved. In Ethiopia, officials started taking DNA samples from victims’ family members to assist in identifying remains.

Countries including the United States have grounded the Boeing 737 Max 8 as the US-based company faces the challenge of proving the jets are safe to fly amid suspicions that faulty software might have contributed to two crashes that killed 346 people in less than six months.

The decision to send the flight recorders to France was seen as a rebuke to the United States, which held out longer than most other countries in grounding the jets.

The US National Transportation Safety Board sent three investigators to help French authorities.

Boeing executives announced that they had paused delivery of the Max, although the company planned to continue building the jets while it weighs the effect of the grounding on production.

The US Federal Aviation Administration grounded the planes on Wednesday, saying regulators had new satellite evidence that showed the movements of Ethiopian Airlines Flight 302 were similar to those of Lion Air Flight 610. That flight crashed into the Java Sea off Indonesia in October, killing 189 people.

The Max jets are likely to be idle for weeks while Boeing tries to assure regulators around the world that the planes are safe. At a minimum, aviation experts say, the plane maker will need to finish updating software that might have played a role in the Lion Air crash.

Boeing said it supports the grounding of its planes as a precautionary step, while reiterating its “full confidence” in the safety of the 737 Max. Engineers are making changes to the system designed to prevent an aerodynamic stall if sensors detect that the jet’s nose is pointed too high and its speed is too slow.

Satellite-based data showed that both the Ethiopian Airlines and Lion Air planes flew with erratic altitude changes that could indicate the pilots struggled to control the aircraft. Both crews tried to return to the airport.

How long the planes stay grounded depends largely on what investigators find on the cockpit voice and flight data recorders, said Peter Goelz, a former managing director for the NTSB.

The Max is the latest upgrade to the Boeing 737s. Because its engines were larger and heavier, they were placed higher and farther forward on the wings. That created concern that the plane might be slightly more prone to an aerodynamic stall if not flown properly, so Boeing developed software to prevent that.

Investigators looking into the Indonesian crash are examining whether the software automatically pushed the plane’s nose down repeatedly, and whether the Lion Air pilots knew how to solve that problem by throwing toggle switches and canceling the automated nose-down commands.

Ethiopian Airlines says its pilots received special training on how to deal with the Max’s anti-stall software.

At the crash scene in Hejere, about 50 kilometres from Addis Ababa, searchers continued to pick through the debris. Blue plastic sheeting covered the wreckage of the plane.

Anxious family members who had begun giving DNA samples waited for news on when identifications of remains would begin, and whether they would have anything to bury.

“We are not told what they have found so far,” Faysal Hussein, whose cousin was killed, told The Associated Press.

“We are sitting here like forever. We were taken to the crash site on Wednesday but not allowed to get a closer look. And then yesterday Ethiopian Airlines officials called us to a meeting but they don’t have anything to say. This is frustrating.”

Pakistan SC to entertain Musharraf’s plea only after he surrenders to the law: Report

Pakistan’s Supreme Court has returned the petition of self-exiled former dictator Pervez Musharraf against his conviction and sentencing by a special tribunal with objection that he is not allowed to appeal without surrendering to the law, according to a media report. On Thursday, the 74-year-old retired general, now based in Dubai, approached the court to […]

Japan’s health ministry said on Thursday 44 more people on a cruise ship quarantined near Tokyo have tested positive for the virus that causes the new disease known as COVID-19. The Diamond Princess, which is still carrying about 3,500 passengers and crew members, now has 218 people infected with the virus out of 713 people […]

Police in Kansas City, Missouri, say at least two people are dead and upwards of a dozen people may have been injured in a shooting. A statement says police were dispatched just before midnight on Sunday for a reported shooting. The statement says they “may still have 15 other victims at area hospitals”. Police believe […]