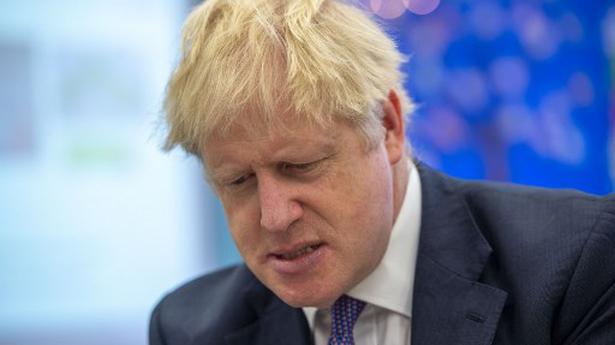 “There was full agreement on the need for an extension,” an EU official said after Ambassadors to the 27 countries staying in the bloc met to discuss postponing Britain’s exit, less than a week before the current deadline of Oct. 31. “Work will continue over the weekend” and envoys will meet again in Brussels on Monday or Tuesday, the person said.

A day after admitting that he will not meet his “do or die” deadline of October 31, Mr. Johnson said it was up to the EU to decide on an extension.

“Of course October 31 is still possible — we could leave on Oct. 31— unfortunately it depends on what the EU says,” he said, adding that if opponents frustrate his bid for an election on December 12 his minority government would not engage in pointless “Brexitology” in Parliament.

The EU envoys had been due to discuss the length of a third delay to Brexit but diplomats decided to hold off to let events play out in London.

One EU diplomat said France pressed the other 26 to wait and favoured a delay until November 15 or November 30 to keep pressure on the British Parliament to approve Mr. Johnson’s deal or face a disorderly Brexit.

News Analysis: What does Musharraf’s death sentence mean for Pakistan

A civilian court in Pakistan sentencing a former Army chief and coup leader Pervez Musharraf to death is nothing short of an earth-shaking moment for a country that has had a long history of legitimising rule-by-khaki. Whatever be the merits or demerits of the judgment — and the legal story is by no means over […]

Hong Kong should “continue to be free and open”, Japanese Prime Minister Shinzo Abe told the Chinese president on Monday. Mr. Abe met with Chinese President Xi Jinping in Beijing ahead of flying to the southwestern city of Chengdu to join a trilateral meeting on Tuesday, which will also be attended by South Korean President […]