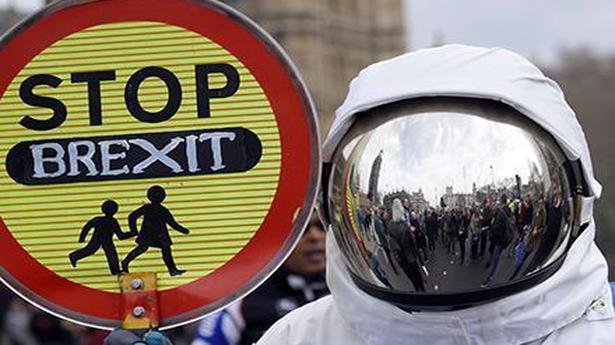 The European Union (EU) has published details of its “completed” preparations for a no-deal Brexit, as it warned that such scenario was becoming “increasingly” likely despite the delay to Brexit till 12 April.

Last week, the EU said it would delay Brexit till May 22 — just before elections to the European Parliament — if Ms. May’s deal was passed by Parliament this week, and would give London time till April 12 to come up with alternative options if the deal were not passed.

The announcement was hailed as a way of preventing the U.K. from crashing out without a deal on Friday, but with the government struggling to rally MPs behind the deal for a third time, and increasing pressure on the Prime Minister to step down from sections of the Conservative Party, the EU outlined detail of its plans of what would happen were the U.K. to crash out of the EU on April 12.

Under the plans, the EU would treat the U.K. as a “third country without any transitionary arrangements” and would apply World Trade Organisation rules and tariffs at its border with the U.K. This would result in U.K. citizens travelling to the U.K. no longer being able to go through the EU queue, while goods coming from the U.K. would be faced with stringent checks, and “significant delays at the border.”

According to a leaflet published on Monday, U.K. nationals would be subject to entry checks, including on the duration of their stay, the purpose of their visit, and whether or not they have sufficient funds.

Over the past couple of years, the EU has been preparing for a no-deal Brexit, and has published 90 ‘preparedness notices’ for businesses, among other things to help businesses across the union prepare for any major disruption. “The EU has maintained — and will continue to maintain — a fully united position throughout its preparations, and during any possible ‘no deal period’,” the European Commission said on Monday.

This followed another tumultuous weekend for the government as Prime Minister Theresa May held a series of meetings, including with members of the right-wing European Research Group, around the road forward.

In a scathing article in The Daily Telegraph, former Foreign Secretary and Brexiteer Boris Johnson accused the government of blinking, and balking and bottling Brexit. However, his message is being seen by some as the suggestion that he could back the deal were the Prime Minister agree to resign. “If she really wants her deal to go through Parliament, the PM could still set out convincing proofs of how the next phase of the negotiations — when all key questions are to be settled — will be different to the first,” he wrote.

Meanwhile, efforts are under way within Parliament to attempt to gain control of the negotiations and over the direction of Brexit — focussing on the kind of relationship the U.K. had had with Europe in the 1970s and 80s when it focussed on “clear economic benefits” rather than “an ever closer political union.”

This includes proposals for a so-called “Common Market 2.0” by a group of Labour and Conservative MPs that would bring in a softer Brexit. It is not yet clear whether this proposal would command the support of a majority within Parliament. It is set to be debated by MPs this week.

“Common Market 2.0 can break the Brexit deadlock… there’s clearly no majority in parliament for no-deal… equally however there is no majority in Parliament for a second referendum and no real chance of Theresa May ever agreeing to one,” wrote Lucy Powell, a Labour MP behind the initiative, on the Labour news site LabourList.

EU leaders will seek a coordinated response to the coronavirus after Italy sealed off much of its industrial north, where six prisoners were killed in a riot over curbs on visits. EU leaders will hold a teleconference to discuss their next moves, European Council President Charles Michel said, with one official saying the call was […]

A British climber too weak to descend from Mount Everest died on Saturday, officials said, the eighth climber to die on the world’s tallest mountain and the 18th in Nepal’s Himalayas during the current climbing season. Hiking officials attributed most of the deaths to weakness, exhaustion and delays on the crowded route to the 8,850-metre […]

The number of COVID-19 cases in Germany has passed 1,000, official data from the Robert Koch Institute disease control centre showed on March 9. There are now a total of 1,112 confirmed cases in Europe’s biggest economy, with the region of North Rhine-Westphalia (NRW) reporting 484 infections — the highest number among Germany’s 16 states. […]